Jose Aldo left the most important decision of his career in the hands of World Extreme Cagefighting matchmakers.

Rapidly emerging as one of the sport’s most feared 145-pound fighters, the 22-year-old Brazilian openly campaigned for a crack at reigning WEC featherweight king Mike Thomas Brown following his spectacular eight-second technical knockout victory against Cub Swanson at WEC 41 on Sunday at the Arco Arena in Sacramento, Calif.

Unbeaten since 2005, Aldo buried Swanson with a flying knee shortly after the opening bell. The blow landed directly on Swanson’s eye, drew blood and left the Californian in visible pain on the mat, as Aldo pounced and finished a man who had never before been stopped on strikes. Spawned by the Nova Uniao camp -- which also produced Wagnney Fabiano, Thales Leites and Vitor Ribeiro, among others -- Aldo’s stock continues to skyrocket.

Aldo seems like the logical next challenger for Brown, a unanimous decision winner against Urijah Faber in the WEC 41 main event. Brown finished Faber inside one round the first time they met in November. This time, the matchup was far more competitive.

The victory -- awarded by scores of 49-46, 49-46 and 48-47 -- further legitimized Brown’s reign atop the 145-pound division, considering it came before a pro-Faber crowd in the former champion’s hometown. Boos greeted the American Top Team standout as he climbed into the cage, though he paid them little attention.

“It wasn’t bad,” said Brown, who has rattled off 10 wins in a row since his submission loss to Masakazu Imanari in 2005. “I don’t talk smack or anything like that. It’s good as long as they’re interested. As long as they care about the fight, that’s what matters.”

Even Jens Pulver has to wonder if he has reached the end of the line.

One of the sport’s most popular and respected figures, Pulver succumbed to a guillotine choke from 20-year-old Josh Grispi in the first-round of their featherweight tilt. The match lasted just 33 seconds.

Never before in his decade-long career had Pulver been finished with such speed.

“It broke my heart,” Pulver told WEC.tv. “He got a good guillotine right there. I’m crushed. I’ve just got to figure out what to do.”

The 34-year-old Washington native found himself trapped in the arm-in guillotine after he finished a takedown. He did what he could to escape, but Grispi’s grip was air-tight, and Pulver soon tapped out. 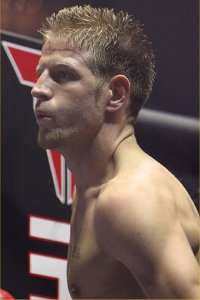 Seth Dikun scored a submission he can tell his grandkids about.

The thrice-beaten Thomas Denny protégé earned a $10,000 “Submission of the Night” bonus for his tapout-inducing flying triangle choke against Rolando Perez. The end came 2:30 into the preliminary bout.

“We just went over it, maybe two or three weeks ago,” Dikun told WEC.tv. “I hit it the first time I tried it, and I’ve been hitting it ever since.”

Dikun, who dropped a unanimous decision to Charlie Valencia in his WEC debut five months ago, survived an early knockdown to pull off the highlight reel submission. A Total Combat veteran, Perez fought to free himself but could not escape. Surrender was his only option.

The WEC post-fight windfall extended beyond Dikun, as Brown and Faber pocketed matching $10,000 “Fight of the Night” bonuses in wake of their five-round battle for the featherweight championship. Brown retained the title with a unanimous decision, as he defeated Faber for the second time in seven months.

Meanwhile, Aldo banked a $10,000 “Knockout of the Night” bonus after he needed just eight seconds to dispatch the highly regarded Swanson. His perfectly placed flying knee marked a brutal end to the Californian’s brief night.

Duke Roufus protégé Anthony Pettis made a strong impression in his WEC debut, as he dazzled the crowd with slick submission skills before putting away Mike Campbell with a triangle choke. “I’m not losing,” Pettis said. “I work too hard. I put too much into this. No one’s stopping me.” The 22-year-old lightweight has stopped six of his seven opponents in the first round … Kyle Dietz, James Krause and John Franchi entered the cage at WEC 41 with a cumulative 20-0 record. All three lost … The bad blood brewing between WEC lightweight champion Jamie Varner and the last man he defeated, Donald Cerrone, looks legitimate. Cerrone moved into position for another crack at Varner’s title with a submission win against Krause at WEC 41. “If that’s what’s next, it’s next. If I see Varner on the street, I’m going to punch him in his mouth,” Cerrone said … Six of the 10 fights at WEC 41 ended in submission … A training partner of former UFC light heavyweight champion Chuck Liddell, Antonio Banuelos has now secured half of his 16 career victories by decision … WEC 41 drew an official attendance of 12,706 (10,110 paid) for an $815,415 gate, according to figures released by the California State Athletic Commission.