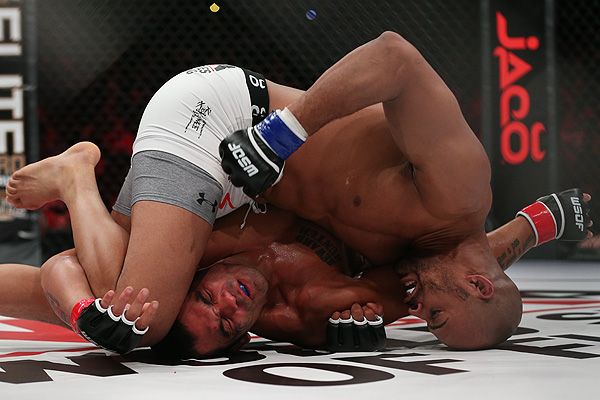 Branch, a former ironworker from New York who hails from the Renzo Gracie camp, was released from the UFC in May 2011 following a single loss that trailed two consecutive wins.

“I was given no answer for why I was cut after a two-fight win streak,” Branch told Sherdog.com. “I don't think I was as active and confident in my skills as I am now as a fighter back then.”

Branch was picked up by WSOF in 2012, and has went 3-0 for the promotion; each of those by unanimous decision. His grinding endurance has been viewed by some as “boring,” but Branch sees it differently.

“My fighting style for me is intelligent; I use my wit and skill to beat people. The overall MMA community has not been educated enough on the use of strategy and skill to appreciate the beauty of the use of arts timing measure distance position etc ... The overall MMA community has been groomed to like slugfests no matter how sloppy and unskillful. That is not my game. I don't feel my style is too cautious; I think it is intelligent and very, very effective.”

While Branch is confident in his skill set, which includes a black belt in Brazilian jiu-jitsu after 10 years under Renzo Gracie and seven years of “fundamental overall MMA” training at that school under Gracie and John Danaher, he recently admitted that he had been shown “holes in his game.”

“To fill the holes in my game I dedicated myself to also become a student of wrestling and striking; not just jiu-jitsu andsubmission grappling,” Branch declared.

Few know that Branch’s first martial art was not BJJ, but karate, which he studied for more than three years before ever training in the gentle art. While BJJ is one of Branch’s main weapons, he actually has more wins by stoppage and decision than by submission.

Of his three career losses, all were to current or soon-to-be UFC fighters; most recently to Anthony Johnson in May 2012. And prior to that, Rousimar Palhares, who recently dropped to welterweight and was released from the UFC for unsportsmanlike conduct.

“As far as Palhares, I'm not thinking about him,” said Branch. “I'm only focused on fighting and finishing my opponent on Saturday ... Of course I would love to avenge my losses but that isn't the focus now.”

Fellow contender for the inaugural WSOF middleweight championship is Jesse Taylor, a younger, but more experienced fighter out of Team Quest, also on a seven fight win streak and the majority of whose wins have come by submission. However, Branch is confident that he knows what Taylor has to bring, and that he has the answer:

“I’m prepared for Taylor with anything that he can possibly bring to the fight Saturday, plus his normal fight game plan,” stated Branch. “ Taylor has been around and fought a lot, but on Saturday I only see myself knocking him unconscious or submitting him and me wearing the middleweight championship WSOF belt on my waist.”