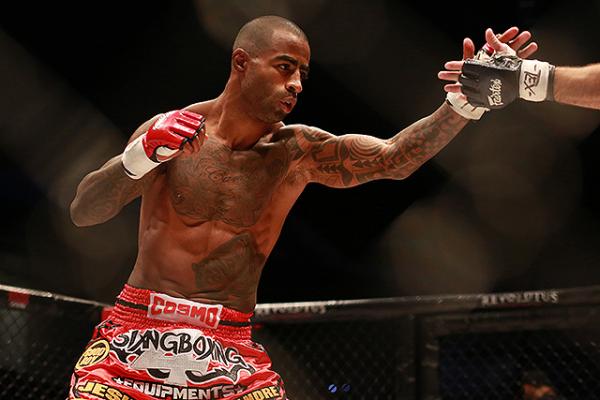 Cosmo Alexandre is coming back to the MMA big stage. | Photo: Andy Hemingway/Sherdog.com

World Series of Fighting on Tuesday announced that Alexandre has inked “an exclusive, multi-year agreement” to compete for the Las Vegas-based organization. Specifics of the deal were not disclosed.

A decorated muay Thai practitioner, Alexandre began his mixed martial arts career in 2011 and ran up a 5-1 record inside the Bellator cage in the span of 13 months, including a rematch win against the only man to beat him, Josh Quayhagen. The 33-year-old was absent from MMA for more than a year before returning to knock out Rey Trujillo in his most recent bout under the banner of Texas’ Legacy Fighting Championship.

Alexandre has focused mainly on kickboxing in the past two years, most recently defeating John Wayne Parr for the Lion Fight super middleweight title in October.

“As a former kickboxing world champion who also made the transition to MMA, I am excited to welcome Cosmo Alexandre to our roster and see him perform,” World Series of Fighting President Ray Sefo stated in a release. “With the addition of Cosmo, our lightweight division is stronger than ever, and I think he will provide World Series of Fighting fans with a number of memorable encounters in the cage and, perhaps make a run at our lightweight world championship.”

The date and opponent for Alexandre’s promotional debut “will be announced soon,” according to a release. WSOF has two events on its slate for the end of the year: WSOF 25 on Nov. 20 in Phoenix and WSOF 26 on Dec. 18 in Las Vegas.