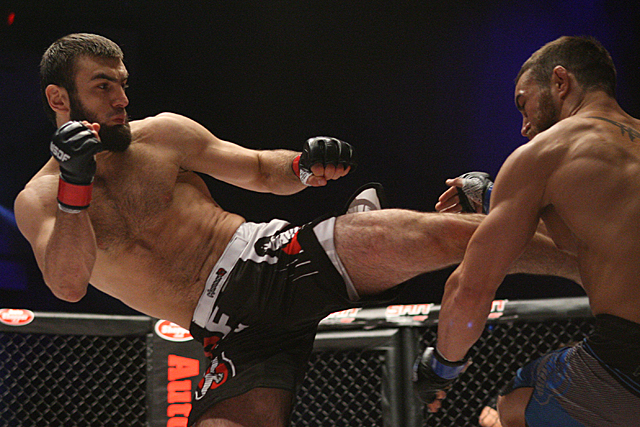 Vagab Vagabov will be out of action until 2016. | Photo: Keith Mills/Sherdog.com


World Series of Fighting has suspended unbeaten middleweight prospect Vagab Vagabov for five months for hitting his opponent after the bell.

MMAJunkie.com first brought word of Vagabov’s punishment on Tuesday. Vagabov defeated Brian Grinnell via second-round technical knockout in a preliminary bout on WSOF 23 at Comerica Theatre in Phoenix on Friday night. After referee Al Guinee intervened to halt the fight, Vagabov threw a knee and standing hammerfist at Grinnell, drawing a reprimand from the official. Shortly thereafter, the two fighters embraced in the cage.

“I spoke with Vagab and his team, and they were very apologetic for his actions,” WSOF Vice President and matchmaker Ali Abdel-Aziz told MMAJunkie.com. “Vagab got caught up in the moment and expressed remorse for his mistake, but as a company, we simply cannot let moments like this go without addressing them directly. We hope this penalty sends a strong message to everyone on our roster that such infractions simply will not be tolerated.”

The incident comes on the heels of the controversial WSOF 22 headliner, where Rousimar Palhares failed to release a fight-ending kimura in a timely manner in a welterweight title defense against Jake Shields. Shields responded by throwing a punch at Palhares in frustration. The Brazilian fighter was stripped of his title and suspended indefinitely by WSOF; he still awaits discipline from the Nevada Athletic commission. Shields, meanwhile, received 50 hours of community service from the NAC for his actions.

Vagabov will be eligible to compete for WSOF again on Feb. 18. The 29-year-old Dagestani was making his debut for the promotion. He is 16-0 as a professional overall.