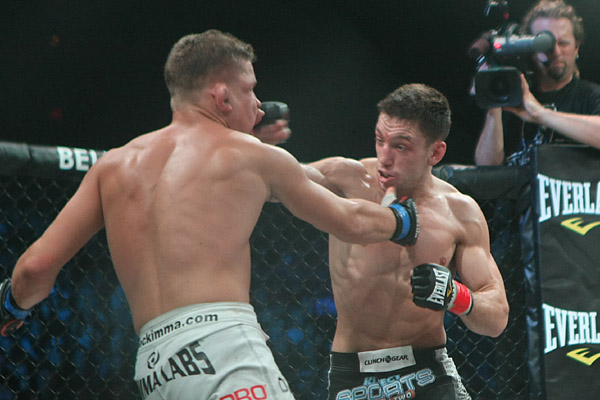 Wagnney Fabiano has suffered a knee injury and will be unable to compete in Bellator’s upcoming featherweight tournament.

In his place steps Mike Corey, (pictured, right) who now meets Ronnie Mann in the Season 6 tournament quarterfinals at Bellator 60. Sherdog.com confirmed the news with a source close to the bout on Thursday morning after an initial report from MMAJunkie.com.

Bellator 60 takes place at The Venue at Horseshoe Casino in Hammond, Ind., and airs on MTV2 and Epix. In addition to the four opening round 145-pound pairings, the March 9 event will also feature Joe Warren’s first defense of his featherweight title, as “The Baddest Man on the Planet” puts his gold on the line against Summer Series winner Pat Curran.

Beaten just twice in nearly seven years as a professional, Corey was initially expected to compete on the Bellator 60 undercard against Bobby Reardanz before being promoted to tournament quarterfinalist. The American has not lost since 2007, rattling off five consecutive wins before fighting Chris Horodecki to a majority draw in his Bellator debut this past November.

One of England’s top featherweight prospects, Mann, 25, has won five of his last six bouts. A veteran of Sengoku and Cage Rage competition, “Kid Ninja” began his Bellator career with back-to-back wins before running into Curran in the Summer Series semifinals. However, the Brit rebounded from the loss this past October, earning a submission victory over Kenny Foster at Bellator 53.