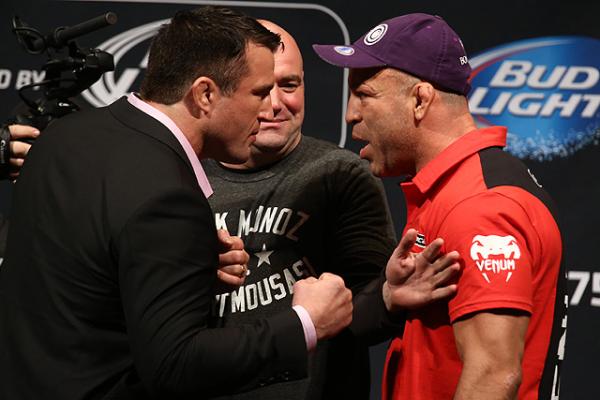 
Wanderlei Silva spoke out on his removal from UFC 175 on Friday, two days after Ultimate Fighting Championship officials announced “The Axe Murderer” had been pulled from a planned clash with Chael Sonnen at the July 5 event, which takes place at the Mandalay Bay Events Center in Las Vegas.

Combate.com first reported the news, and Sonnen subsequently asserted on “UFC Tonight” that Silva had refused to take a random drug test. Sonnen and UFC officials then announced that Vitor Belfort had been tapped to replace his fellow Brazilian. However, Belfort must first receive a Nevada license before that fight can become official, and “The Phenom” is expected to attend a commission hearing next month for that purpose.

Reports then began to surface Friday that UFC President Dana White had implied that Silva had been released by the promotion, stating that the former Pride champion was “done.” White later clarified to MMA Fighting that he was only referring to Silva’s participation at UFC 175 and that the Nevada Athletic Commission would decide what came next for “The Axe Murderer.”

Silva, who coached opposite Sonnen on the third season of “The Ultimate Fighter: Brazil 3,” responded to the news in a YouTube video, which has been transcribed below:

“This is all a big confusion. Everything I’ve heard, I heard it just like you, from the Internet. Last Saturday, a guy showed up at my gym with several papers in English saying that I had to sign the papers. I asked him if all of the documents were written in English, and he said yes. He did not show me any identification, so I told him that I can’t read English very well, and I would need my lawyer present to be able to sign any documents. Then, I had to leave, because it was the day of [Renan] Barao’s fight [at UFC 173], and I was really busy here in Vegas.

“In 20 years of career and 50 professional fights, I never refused to test or failed to apply for a license to fight. My fight will be in Las Vegas on July 5, so we were more than one month from the fight. And my plans were to do all of my obligations once I get back from Brazil, since I’m going to Brazil for the ‘TUF: Brazil 3’ finale.

“Once I am back in Las Vegas, I will reach out to the [Nevada Athletic Commission] to submit myself to any blood or urine test like I always have done.

“If this fight doesn’t happen, it will be very difficult for me. I have invested all my time, and I’ve gone through a lot to make this fight happen. I’ve had to deal with a lot of pressure, and I went through a lot on ‘TUF: Brazil 3.’ I’ve been putting all my strength and effort into my training camp. I’m training harder than I’ve ever trained in my life.

“This is the fight I wanted the most in my entire life, and I will do everything I can to make this fight happen. All of this will get resolved, and I will be there on July 5 to put on a great show for all of you, my friends. I will show our strength and willpower, and I will achieve one more victory for us. From the bottom of my heart, thank you to all my supporters.”

Silva, 37, has gone 3-2 in his last five fights but has not competed since March of last year, when he knocked out Brian Stann at UFC on Fuel TV 8 in Japan. The former Pride 205-pound champion joined the UFC in 2007 and has earned a promotional record of 4-5 over six years with the Las Vegas-based company.