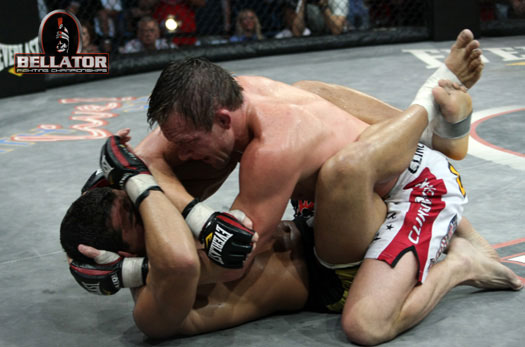 
Nearly knocked out and submitted at the end of round one, Joe Warren refused to bow out without a fight.

Warren eked out a split decision over the previously unbeaten Patricio “Pitbull” Freire in the 2010 Bellator Fighting Championships featherweight tournament final on Thursday at Fourth Street Live in Louisville, Ky. All three judges scored it 29-28, two of them for Warren.

“I feel tired and happy,” said Warren, who, according to Bellator officials, was violently ill in the hours leading up to the final. “It was a tough fight. I knew it would be.”

For a time, it appeared as though Warren would not survive to see the second and third rounds. Thoroughly dominated for the first five minutes, Freire battered him with jabs, power punches, a standing arm-triangle choke and even a takedown. As round one drew to a close, the 22-year-old Brazilian dropped Warren with a pair of crackling right hands and followed him to the ground, where he stepped up the assault. Ultimately, Freire secured full mount and forced Warren to surrender his back. A series of unanswered punches and hammerfists had the referee hovering, and Freire cinched a tight rear-naked choke as the horn sounded.

Freire’s offensive output dropped noticeably in rounds two and three, as he allowed Warren to get a foothold in the match. The Dream veteran scored with his first takedown with 2:39 left in the second round and kept Freire on his back for the remainder of the period. Warren grew stronger in round three, as he delivered three takedowns and bloodied Freire’s lip with elbows, forearms and hammerfists from the top. It was enough to sway the judges.

“He was a very strong competitor,” Warren said. “It was a tough guy to break. He was a great opponent.”

The result from the 2010 Bellator middleweight tournament final was far more decisive, as Alexander Shlemenko stopped World Extreme Cagefighting veteran Bryan Baker on first-round punches. The end came 2:45 into round one.

Shlemenko clipped Baker with a stinging right cross, backed it up with a knee to the body and trailed his foe to the ground. There, he unleashed a torrent of standing-to-ground punches on the fading Baker. Some 15 blows were thrown, several of them landing cleanly, and the referee stepped in on Baker’s behalf.

Finally, Strikeforce veteran Zoila Frausto knocked out Rosi Sexton with a brutal knee and punches on the ground 2:00 into the first round of their 120-pound catchweight bout.

Spawned by Team Buhawe, Frausto has rattled off back-to-back wins since her Strikeforce debut ended in submission to Miesha Tate. The knockout places Sexton’s status in the 2010 Bellator women’s 115-pound tournament in doubt.

“I saw that opening there, and I just threw [the knee] up,” Frausto said. “I wanted to finish, and I finished.”