YOKOHAMA, Japan -- Joe Warren stunned the mixed martial arts world with a split decision upset of Norifumi Yamamoto in the featherweight grand prix quarter-finals at Dream 9 on Tuesday at the Yokohama Arena.

The defeat snapped Yamamoto’s 14-fight winning streak, which dated back to May 2002.

Before a crowd of 15,009, the Greco-Roman world champion relentlessly chased down the Japanese superstar and forced him to clinch. Warren employed knees to the body and head, as well as the customary Team Quest dirty boxing, with hard uppercuts and hooks. The southpaw Yamamoto tried to keep Warren at bay with push kicks, low kicks and swift right hooks, but, despite scoring with his best shots, he could not faze Warren.

Warren took Yamamoto down from the clinch, as well, and grinded on Kid with punches and knees to the tailbone. Aside from controlling Warren’s wrists and throwing up some punches of his own, Yamamoto was neutralized beneath the tenacious American.

Oddly enough, Yamamoto (17-2, 1 NC) got his break when referee Yuji Shimada stood up the two fighters and gave the tournament favorite a yellow card for passivity. From there, Kid began to break through on the feet, landing low kicks and single punches at will. Warren continued to pursue clinch fighting, however, but was stifled in the takedown department until he caught a Yamamoto kick and put him down in the final minute of round one.

The second round brought more of the same, as the inexorable Warren absorbed punishment, pushed toward the clinch, fought for takedowns and forced Yamamoto to brave foreign territory in attempting two armbars.

Hikaru Adachi scored the bout for Yamamoto, but fellow judges Matt Hume and Yasushi Miyake sided with Warren (2-0) and sent the American into the semi-finals of the tournament.

“I’m pretty surprised I won a decision,” Warren said. “Our plan was to finish Kid because we assumed that he was [Dream’s] champion and [Dream] wants to keep him a champion. The one guy that scored it for Kid -- that’s something that I expected. I’m just happy the other two judges saw the way that the fight went.” 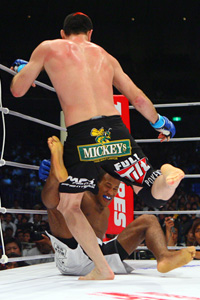 Daniel Herbertson/Sherdog.com
An illegal kick ended the
Miller vs. "Jacare" bout.
The main event -- which paired Ronaldo “Jacare” Souza against Jason “Mayhem” Miller for the recently vacated Dream middleweight championship -- proved a disappointment in wake of the heated Warren-Yamamoto tilt.

After he tripped Jacare to the mat, Miller (22-6, 1 NC) launched an illegal soccer kick at Souza and opened a large gash on the top of his head. Though the bout resumed shortly after, the blood continued to flow from Souza, forcing Shimada to call it a no contest 2:33 into the first round.

“It’s because I’m a fool,” Miller said. “I got too excited. Honestly, it was an accident. I do the same technique in training, where I grab a guy’s leg and kick him as he’s falling, but he was already on the ground. And so, here we are.”

Souza (10-2, 1 NC) kept his smile despite the disappointment.

“I think that every time I stepped forward and threw punches, I was damaging Miller,” he said. “If the fight were to have continued, I think I would have won.”

Tokoro (22-16-1) put Cullum in danger early with a tight triangle-armbar combination, but the American escaped, took top position and dropped big punches and knees. Tokoro reversed into dominant position and threatened with shots and more submission attempts, however. The back-and-forth exchange of scrambling for positions and throwing strikes, while tense and entertaining, finally took its toll in the second round, as an exhausted Cullum (14-3) was victimized by a lightning fast rear-naked choke. The King of the Cage veteran tapped the mat at 1:38.

Hiroyuki Takaya joined Warren and Tokoro in the semi-finals.

Yoshiro Maeda gave Takaya (11-6-1) a run for his money before he was caught at the end of round one in their featherweight tournament bout.

Maeda (24-7-2) frustrated his foe standing and on the ground. He took top position in half guard and mount repeatedly and grinded down Takaya, who held on and waited for the referee to stand them up. Earning a yellow card for his inactivity in the final minute, Takaya redeemed himself with a well-timed overhand right that twisted Maeda where he stood. Takaya lunged to finish, but as Maeda began to put his legs between himself and the “Streetfight Bancho,” referee Kenichi Serizawa moved in to stop it. Maeda did not protest.

In a ballyhooed non-tournament lightweight tilt, Tatsuya Kawajiri returned to his roots against Gesias Cavalcante, as he reverted to wrestling when the American Top Team product threatened to overwhelm him standing.

Though Kawajiri got in some good low kicks and combinations, “JZ” scored with more of them, leaving the T-Blood representative to shoot for takedowns. In defense, Cavalcante (14-3-1, 1 NC) almost locked up several tight guillotines on the incoming wrestler, but Kawajiri narrowly escaped each time and carried on with his control and punches from top. All three judges sided with Kawajiri (24-5-2).

Meanwhile, Gegard Mousasi again proved that size was no obstacle for him, as he submitted Mark Hunt 1:19 into round one in the opening round of the Super Hulk tournament.

After lunging with a big punch, Mousasi (25-2-1) ducked, reached for his hefty opponent’s lead foot and tripped Hunt (5-6) to the mat. Mousasi followed with a big punch on the way to taking side mount, attacking Hunt’s left arm with the kimura for the eventual tapout.

Finally, Hong Man Choi handily defeated MMA neophyte Jose Canseco in the first round. The 44-year-old Canseco (0-1) made several efforts at swinging with big hooks and middle kicks, but the 7-foot-2 Korean was impervious and walked down the former Oakland A’s slugger with big pawing punches. According to Canseco, a right knee injury incurred during training caused him to trip after he threw a middle kick, whereupon Choi (2-2) followed him down to the mat and unleashed some ground-and-pound. The merciful end came 1:17 into the first round.