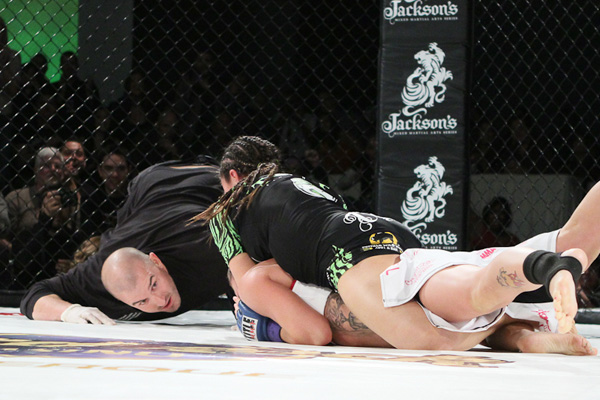 In just 132 seconds, her moment was over. The payoff was worth it, however, as “The Karate Hottie” forced Diana Rael to tap to a rear-naked choke in the first round of their Jackson’s MMA Series 7 main event bout Saturday night at the Hard Rock Hotel and Casino Albuquerque.

Waterson hadn’t competed since a first-round technical knockout of Masako Yoshida on a regional North Dakota card in April 2010. Her most extensive fighting action since then consisted of an appearance on Season 3 of the MTV reality show “Bully Beatdown.” The birth of Waterson’s first daughter, Araya, had kept her plenty busy in the meantime. It didn’t take long for the Greg Jackson protégé to realize how much she missed the sport.

“I freaking love it in this cage,” Waterson said, addressing the crowd at the Hard Rock following her victory. “Before I got here I was like, ‘Why do I do this?’ It’s because of all you guys.”

Rael (3-2) was aggressive in the early going, attacking Waterson (9-3) against the cage and landing knees in the clinch. After the two combatants broke away from the fence, Waterson offered a glimpse of her martial arts background by rocking the Colorado native with a front kick.

Waterson followed up with a kick to the body, but Rael caught it and took her opponent to the mat, landing a series of short punches while in guard. The advantage proved to be fleeting, as Waterson swiftly reversed position and locked in the decisive choke. She punctuated the victory with a celebratory cartwheel in the center of the cage.

“It’s been a long time,” Waterson said. “To prepare all this time … when you get in the ring everything goes out the window. You don’t know what’s gonna happen.” 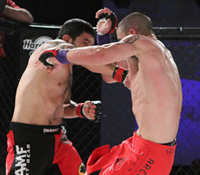 W. Fox
Martinez took out Hanjani.
Ali Hanjani had fond memories of his first fight in New Mexico, a visit which resulted in a first-round triangle-choke submission of the previously unbeaten Sean Spencer at MMA Fight Pit “Genesis” in August.

Henry Martinez made sure his return trip wasn’t nearly as enjoyable, submitting the Serial Boxe representative with a reverse triangle choke at the 3:44 mark of the second round in their light heavyweight, co-main event scrap.

Hanjani (2-2) started strong, defending Martinez’s takedowns while starching the Jackson’s MMA product with inside low kicks in the opening stanza. Martinez said that the strikes weren’t significant enough to slow
him down, however.

“You’ve just got to shake it out and go (back) to the game plan,” he said.

In round two, he did exactly that, closing the distance against Hanjani and driving his foe to the canvas. With the 26-year-old Denver native stacked against the cage, Martinez went to work with a flurry of left hands. Hanjani’s attempts to push Martinez away were unsuccessful, and the New Mexican remained diligent in working his ground-and-pound assault.

Given a slight opening, an opportunistic Martinez took Hanjani’s back and locked in the reverse triangle, giving his opponent no option but to ask out of the contest.

“I’ll fight whenever, whoever, wherever,” said Martinez (7-1), who won his third straight fight under the Jackson’s MMA Series banner. “Let’s do it. “ 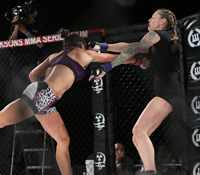 W. Fox
Esquibel outpointed Riehle.
Earlier, superior speed and movement carried the day for professional boxer Jodie Esquibel against Amy Riehle in a women’s 109-pound catch-weight bout. Esquibel outclassed Riehle on the feet throughout, working the body and head with punches while mixing in kicks.

The taller Riehle had some success keeping the Jackson’s MMA representative away with front kicks, but the speedy Esquibel was able to close distance and land multiple combinations in each round. All three judges saw the bout 30-27 in favor of Esquibel, who won her professional MMA debut against Brittany Horton at the Jackson’s MMA Series 4 last April.

“She was super tough and I got frustrated,” Esquibel said. “I knew that I could get inside, but she kept me at bay with that front kick.”

Overwhelmed by the wrestling and top game of Adam Gonzales for two rounds, Armando Montoya Jr. showed great resolve, stuffing his first takedown of the fight and submitting the Jackson’s MMA product with an anaconda choke 53 seconds into the final round of their welterweight encounter.

For 10 minutes, Gonzales imposed his will, taking the Las Cruces, N.M., native down four times while peppering his foe with short punches inside his guard. When Gonzales shot for his fifth takedown of the night early in round three, Montoya was ready, stopping the takedown and securing the choke.

Jackson’s MMA representative Riki Nobuta made his amateur debut a memorable one, submitting Team Pueblo export Adam Soto with an armbar at 1:42 of the second round in a 160-pound catch-weight affair.

Pueblo, Colo.,’s Jose Caro forced Tempe, Ariz., native Pete Quezade to tap to a guillotine choke at 2:59 of round one in a middleweight bout in the first bout of the evening.