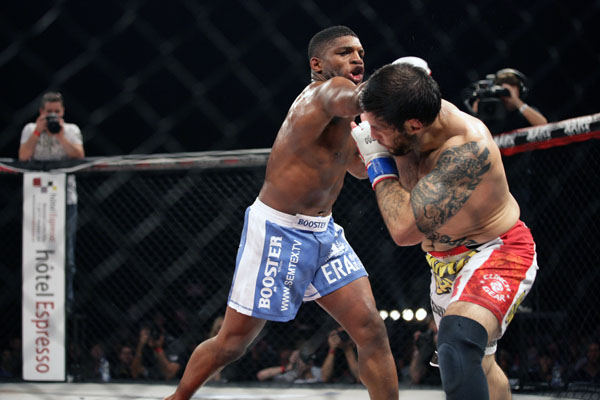 
It didn’t happen with a bang, but British welterweight star Paul “Semtex” Daley scored his second win in six weeks on Friday, handily decisioning Luigi Fioravanti in the main event of Ringside MMA 12.

Daley controlled nearly the entire 15-minute affair inside Montreal’s Bell Centre, punishing his fellow UFC veteran with superior striking and shutting down all attempts to bring the fight to the floor. When Fioravanti wasn’t trying to tie up, take down or pull guard, he was moving away from his opponent’s potent punches and leg kicks, leading an exasperated Daley to walk forward with his hands at his waist in the bout’s final minute. Despite his frustration, Daley earned scores of 30-27 from all three judges, his second unanimous decision in as many months after outpointing Jordan Radev on Sept. 10.

With the win, Daley improved to 3-2 on the year and 2-0 since exiting Strikeforce on the heels of back-to-back losses to Nick Diaz and Tyron Woodley. Fioravanti has now lost three straight for the first time in his career, having also dropped decisions to Joe Doerksen and Andrei Semenov.

Undefeated English “Poster Boy” Jimi Manuwa stayed perfect Saturday at UCMMA 24 “Hands of War” in London. The 28-year-old Manuwa, who reportedly turned down an offer to fight at November’s UFC 138, improved to 10-0 and defended the UCMMA light heavyweight title with his ninth career knockout, a first-round kneeing of the overmatched Nick Chapman.

Eric Esch, the super-heavyweight toughman better known as Butterbean, suffered his fourth defeat in five fights on Friday at Prestige Fighting Championship 3 in Fort McMurray, Alberta, Canada. Hometown hero Sandy Bowman, a 40-year-old former lightweight fighting at 223 pounds, felled Esch with a left high kick only moments into the bout and dropped punches from top position until the 378-pound behemoth tapped out at the 54-second mark.

Fighting for the second time in two weeks, Swiss lightweight Ahmet Yalbirdak picked up another first-round submission win at Saturday’s Shooto Switzerland “Road 1” in Zurich, tapping Mickael Ignaczak with a heel hook at the 2:25 mark. Yalbirdak’s teammate and fellow Augusto Frota student Gregor Weibel moved to 5-0 with five submissions by finishing Thomas Berset with an arm-triangle choke at 2:59 of round two.