Despite a tepid start, Tomasz Drwal scored an impressive finish in his post-UFC debut on Saturday, knocking out Leonardo “Chocolate” Nascimento in the 198-pound main event of Fighters Arena Lodz 2 in Lodz, Poland.

The 29-year-old Drwal -- who was cut by Zuffa in September following back-to-back losses to middleweight jiu-jitsu players Rousimar Palhares and Dave Branch -- struggled with his opponent’s tenacious takedowns and top game in the opening stanza of the catchweight affair. Midway through the next round, however, the Alliance MMA-trained “Gorilla” stuffed a shot from Nascimento, shucked the Argentine’s legs, and began hammering away with vicious punches from above. Half a dozen direct hits separated Nascimento from consciousness and the bout was waved off at 3:37 of the second frame, improving Drwal’s record to 18-4-1, with 11 wins by way of knockout.

Drwal’s countryman, onetime Bellator signee Michal Kita, did not fare as well in his heavyweight co-main event against Latvia’s Konstantin Gluhov. After a fairly even opening, Kita visibly tired in the second round as he absorbed straight punches and punishing clinch work from the muscular kickboxer. Kita retired from the bout in his corner before the start of the final period, resulting in his third consecutive defeat.

A training partner of Diego Sanchez at Jackson’s MMA, Parks improved to 4-0 in MMA by using his base skill to suffocate “The Naked Man” -- a veteran of more than 25 fights -- for the better part of three rounds. The grinding performance earned Parks scores of 30-27 and 29-28, while one judge sided with Ortiz, 29-28. The 27-year-old “Slick Willie” is next scheduled to meet Justin Gonzalez on April 8 at the inaugural Rogue Warrior Cage Fighting Championships card in El Paso.

On the undercard of Bloodsport’s mixed MMA and boxing event, Greg Jackson-trained bantamweight Matt Leyva sought to avenge the only loss of his career against Joe Gustina, who won the pair’s April 2010 meeting via triangle choke. It was Gustina who prevailed once more, however, surviving an early guillotine attempt to armbar Leyva at 2:56 of the first round. 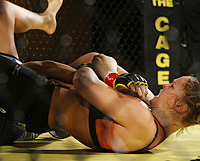 Well-traveled Slovakian light heavyweight Attila Vegh snapped the five-fight win streak of Baga Agaev at Heroes Gate 3 on Thursday, forcing the Russian corner to throw in the towel in the third round. On the undercard of the show, which took place at Tesla Arena in Prague, 25-year-old lightweight Ivan Buchinger improved to 16-2 with a unanimous decision over Maratbek Kalabekov... Quebec-based bantamweight Stephane Pelletier upped his record to 4-1 with a first-round armbarring of Mikael Pellerin at Ringside MMA’s “Rising Star 2.” The show took place at Metropolis nightclub in Montreal on Saturday and featured a 155-pound main event where Steve Simms submitted Yohan Gariepy via rear-naked choke at 2:24 of the opening frame.