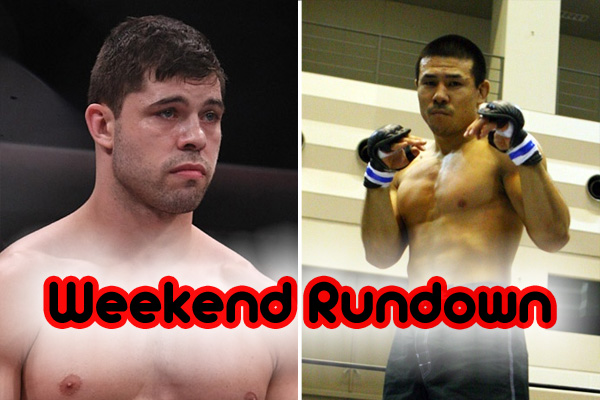 Unbeaten lightweight Joe Ellenberger returned to the cage of Victory Fighting Championship Saturday, exactly 53 weeks after his last appearance in the Midwestern promotion, and the man nicknamed “Excalibur” showed no signs of dullness.

Ellenberger, the 26-year-old fraternal twin of UFC welterweight contender Jake Ellenberger, used his collegiate wrestling base to punish James Warfield for 15 minutes, repeatedly flooring the Wisconsin veteran with takedowns and pummeling from top control. After three rounds, Ellenberger took the clear-cut unanimous decision and improved to 12-0 as a professional.

The win was Ellenberger’s second since returning to MMA in May after a nearly two-year hiatus. In October 2009, Ellenberger was reportedly offered a fight against Mark Bocek in the UFC, but was forced to turn down the bout after being diagnosed with paroxysmal nocturnal hemoglobinuria (PNH), a rare disorder which causes the body’s immune system to destroy red blood cells. Now fit to fight and training alongside his brother at Premier Combat Center in Springfield, Neb., Ellenberger is moving ever-closer to finally entering the Octagon.

Another man seeking to join the UFC fold, “The Ultimate Fighter 10” heavyweight Abe Wagner, was featured in the main event of Saturday’s VFC 35 at the Mid-America Center in Council Bluffs, Iowa.

Wagner, 31, was eliminated from “TUF 10” in the show’s opening round, but made waves in January by punching out former UFC champ Tim Sylvia in 32 seconds. The Nebraskan’s momentum was slowed with a March submission defeat to Aaron Rosa, but Wagner got back on track Saturday with a first-round rear-naked-choking of Omaha’s Justin Grizzard.

Philadelphia-based prospect Brylan VanArtsdalen defended his Xtreme Fight Events featherweight title Saturday in his home state of New Jersey, picking up his fifth consecutive submission victory by putting Anthony Leone to sleep with a first-round guillotine choke. VanArtsdalen has not lost since being submitted by Rich de los Reyes in his April 2010 pro debut, while Leone, who joined World Extreme Cagefighting with a perfect 9-0 record last June, has now lost five of his last six.

Competing for the first time since his one-and-done Octagon run, “TUF 11” alumnus James Hammortree notched a unanimous decision over 46-year-old Joe Johnson in the main event of Saturday’s Real Fighting Championships 24 “Explosion” at A La Carte Pavillion in Tampa, Fla.