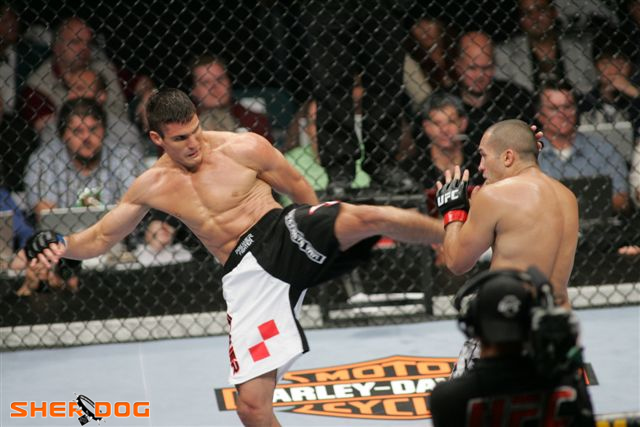 Jumping into the flyweight frenzy currently permeating mixed martial arts, Japanese promotion Deep on Sunday launched an eight-man tournament to crown its inaugural 125-pound champion. The headliner of Deep "Nagoya Impact: Kobudo Fight" -- the last MMA event to be held at Nagoya’s Asunal Kanayama Hall -- saw Shooto vet Akira Kibe back up his reputation as the man to beat.

The 35-year-old BJJ black belt waded through strikes to get inside on Takashige Hirukawa, then tripped the kickboxer to the ground and quickly established mount. From there, the result was academic, as Kibe softened “Crazy Hiru” with punches before peeling off a textbook armbar at the 2:17 mark. Kibe, who has spent the bulk of his 10-year career competing at bantamweight, has now won 10 of his last 11 outings.

Kibe wasn’t the only member of his Aichi-based Splash gym to advance in the tournament. In the evening’s co-main event, Naoyuki Kato used his lanky frame to put away the smaller Hirotaka Miyakawa in the opening round. Miyakawa recovered from an early knockdown and rear-naked choke attempt by posting and sweeping to top position, but was dazed by a hard upkick as he stood over the prone Kato. Sensing his opponent was stunned, Kato leapt to his feet and floored Miyakawa with a single punch, then kept firing until referee Kenichi Serizawa intervened at 3:45.

The last man to defeat Kato, 23-year-old Takeshi Kasugai, spent the first round of his quarterfinal bout defending against the grappling attack of Wajutsu Keishukai fighter Takumi Murata. However, the local favorite turned the tables in the second frame, scoring a trip takedown and battering a shrimping Murata with hammerfists to the head and body. When Murata scrambled to his feet and shot for another takedown, Kasugai turned the corner to take his back, where he sunk in a rear-naked choke which put Murata to sleep with just 10 seconds remaining in the round.

In the fourth quarterfinal pairing, Club Barbarian student Tomoki Motoya snapped a two-fight losing streak and nearly snapped Akito Sakimura’s arm in the process. After jumping guard repeatedly in the first period, 22-year-old Motoya found what he was looking for in the second, using a kimura to sweep to top position before cranking Sakimura’s arm behind his back for the tap at the 3:41 mark.

Deep’s first flyweight ace will be crowned July 22, when the semifinals and final will play out at Zepp Nagoya.

Quick Hits
Onetime UFC talent Goran Reljic notched his second win since exiting the Octagon on Saturday at Strength and Honor Championship 5 in Geneva, Switzerland. Competing at heavyweight, Reljic needed just over three minutes to blast Rogent Lloret with punches and force referee Remco Pardoel to wave the fight off. The event, which was attended by Antonio Rodrigo Nogueira, also featured Bellator veteran and Reign MMA light heavyweight Raphael Davis, who punched out Bosnia’s Berin Balijagic at 1:26 of round two.

Danny Martinez continued his climb in the flyweight division on Saturday night, as “The Gremlin” pounded out Rich Bonafidini in the first round of their title fight at Xplode Fight Series "Disarm" in Valley Center, Calif. Martinez has won three in a row since being outpointed by then-top-ranked Jussier da Silva in December 2010. XFS also got a new featherweight champ in Escondido, Calif.’s Jason Miknuk, who knocked David Salas senseless with a well-timed knee after only 16 seconds.

Katja Kankaanpaa stayed perfect and added a major win to her résumé Friday with a unanimous decision against ex-Valkyrie champion “V.V” Mei Yamaguchi. Fighting before a partisan crowd at Botnia Punishment 11 in Seinajoki, Finland, Kankaanpaa used her size advantage to thwart the Japanese fighter on the feet and control the action on the floor across all three rounds, improving to 6-0.

Welterweight prospect Robert Whittaker forced a first-round stoppage against Shaun Spooner on Friday in the main event of Superfight Australia 13. The 21-year-old from New South Wales moved his record to 9-1 and has posted back-to-back wins since falling to Hoon Kim under the Legend banner last October.