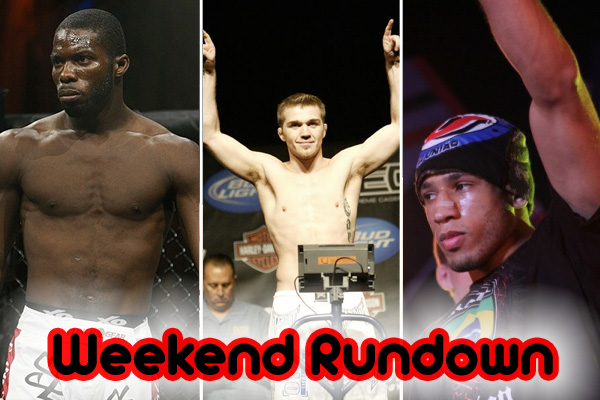 
Jettisoned UFC welterweight Amilcar Alves halted the first two-fight losing streak of his career, as his anaconda choke submitted Edmilson Santos in the Shooto Brazil 21 headliner on Saturday at the Bennett College Theater in Rio de Janeiro, Brazil. The end came 46 seconds into round two.

A judo black belt, Alves was released by the UFC following consecutive defeats to Mike Pierce and Charlie Brenneman. The Nova UniÃ£o representative has won nine of his past 11 bouts.

Meanwhile, Alves’ teammate, Hacran Dias, upped his latest winning streak to five fights, coaxing a tapout from Arielson Silva with a rear-naked choke 3:17 into the first round of their encounter. The 26-year-old Brazilian has finished his last three foes, two of them inside the first round.

Jory Erickson stopped International Fight League, UFC and Bellator Fighting Championships veteran Brad Blackburn on first-round strikes in the CageSport 13 co-main event on Saturday at the Emerald Queen Casino in Tacoma, Wash. Erickson finished it 2:50 into round one.

Blackburn appeared to have the fight in hand after he dropped Erickson early in the bout. However, Erickson returned to an upright position, regained his faculties and leveled Blackburn with a punch of his own. Erickson brought it to an end with follow-up blows, as Blackburn suffered his fourth consecutive defeat.

Meanwhile, WEC alum Bryan Caraway submitted Marlin Weikel with a rear-naked choke 3:17 into the first round of their featherweight duel. Anchored at the Urijah Faber-led Team Alpha Male camp, the 26-year-old won for the fourth time in six bouts. Caraway found himself on the Zuffa LLC chopping block in wake of consecutive defeats to Mark Hominick at WEC 46 and Fredson Paixao at WEC 50.

Quick Hits: Bellator Fighting Championships veteran Bryan Goldbsy took a unanimous decision from journeyman Aaron Williams in the Atlas Fights “Cage Rage 6” headliner on Friday at the IP Casino in Biloxi, Miss. The victory brought a halt to Goldsby’s two-fight losing streak … Brad Peterson submitted WEC alum Aaron Brink with a first-round armbar in the Rage in the Cage 149 main event on Saturday at the Wild Horse Pass Casino in Chandler, Ariz. Peterson sprang the submission 2:50 into round one … WEC castaway Brendan Seguin stopped Hector Urbina on first-round strikes in the Impact Fight League “The St. Valentine’s Day Massacre” headliner on Friday at The Palace of Auburn Hills in Auburn Hills, Mich. Urbina met his demise under a hail of elbows 3:51 into round one … Surging Canadian welterweight Jordan Mein won for the seventh time in his last eight appearances, as he choked Keto Allen unconscious with a first-round guillotine at Rumble in the Cage 42 on Saturday at the Exhibition South Pavilion in Lethbridge, Alberta Canada. Mein, who wiped out Joe Riggs less than a month ago, needed just 42 seconds to finish the job.