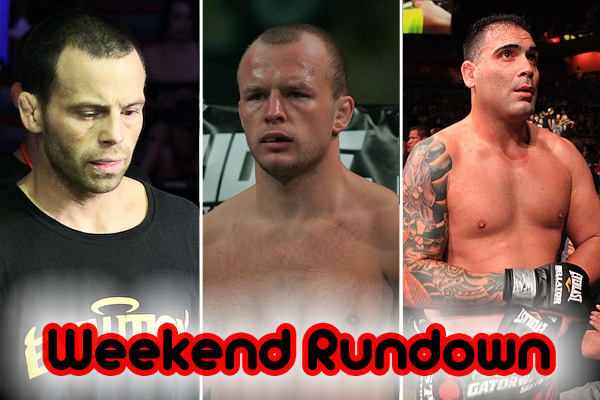 
The attention of the MMA world was focused firmly on San Diego this past weekend, but without a major UFC event to contend with, the four-day stretch of Dec. 15-18 was loaded with quality fights throughout the United States and across the globe.

On Saturday, Khabarovsk, Russia, played host to the Far Eastern Federation of Modern Pankration’s “Battle of Empires,” an event which featured a crew of big-stage veterans atop its bill. Two-time Bellator middleweight tournament winner Alexander Shlemenko wasted little time in returning to the cage following his most recent tourney win, earning a unanimous decision over two-time UFC vet Julio Paulino just 35 days after besting Vitor Vianna. The Russian “Storm” was able to avoid nearly all of Paulino’s takedown tries, keeping vertical to batter the American grappler for 15 minutes with all manner of strikes from near and far.

In the co-headliner, former UFC heavyweight champion Ricco Rodriguez took a drastically different path to victory. Facing Russian Bashir Yamilkhanov, Rodriguez looked to grapple from the onset and did not relent once he got his vastly less experienced foe on the floor. After unleashing heavy ground-and-pound in the opening stanza, “Ricco Suave” polished off a bloodied Yamilkhanov with punches from mount at 2:56 of round two.

In Kearney, Neb., on Friday, ex-UFC lightweight champ Jens Pulver was sent back to the loss column in brutal fashion by unheralded opponent Timothy Elliot. The main event of Resurrection Fight Alliance’s inaugural show ended at 2:12 of the second round when Elliot, a former National Junior College Athletic Association wrestling champion, perfectly placed a knee on the temple of a tired “Little Evil.” Pulver collapsed to the canvas unconscious and remained prone for a few tense minutes after being rescued by referee John McCarthy.

Pulver was not the only notable name on the RFA card, which also saw UFC vets Gilbert Yvel and Justin McCully record respective first-round stoppages of Damian Dantibo and Justin Grizzard.

Competing in his hometown of Natal, Brazil, for the first time in nearly four years, world-ranked flyweight Jussier da Silva won his third straight on Thursday at Fort MMA Championships. Formiga used his tenacious grappling attack to seize the back of previously unbeaten Rodrigo Santos and latched on a rear-naked choke, coaxing the tap at 3:52 of the first frame.

Rodrigo Lima was recently announced as part of Bellator Fighting Championships’ sixth-season bantamweight tournament, but the unbeaten Tata Fight Team rep made one more stop Saturday on his way to the circular cage. Lima needed less than three minutes to punch out the green Denilson Silva at Watch Out Combat Show 17 in the Barra da Tijuca neighborhood of Rio de Janeiro, raising Ratinho’s record to 10-0 with eight first-round finishes.

Long-running Colorado promotion Ring of Fire’s 42nd offering featured a featherweight headliner with local favorite and former Zuffa talent Tyler Toner, who outclassed Nick Macias in the standup department across three rounds to take a unanimous decision on Saturday in Broomfield, Colo. On the undercard, onetime IFL lightweight ace Ryan Schultz fought for the first time in 25 months and submitted Angelo Duarte via rear-naked choke at 2:47 of the first round.

Though nearly cut in half due to injuries and “TUF: Brazil”-related withdrawals, WFE Platinum 11 went on as scheduled Friday in Salvador, Bahia, Brazil. Former EliteXC bantamweight champion Wilson Reis, loosed in October from his Bellator contract, captured the vacant WFE featherweight belt by strangling Bruno Menezes with a first-round rear-naked choke.

Shimura Dojo presented the 20th installment of its Heat series Saturday at Differ Ariake in Tokyo, where Japanese Brazilian Henrique Shigemoto emerged as the Nagoya-based promotion’s middleweight champion. Shigemoto, who has blitzed through four opponents in less than three minutes since beginning his MMA career 12 months ago, tapped out South Korea’s Eun Soo Kim with a brabo choke at 2:24 of round one.