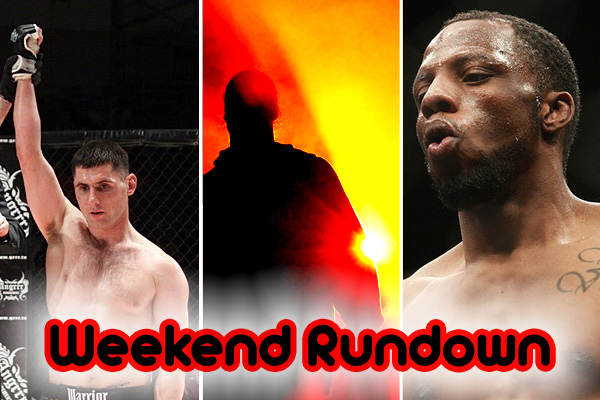 
World Extreme Cagefighting veteran Courtney Buck submitted Frank Johnson with a first-round rear-naked choke in the Brutaal Fight Night “The Rapture” main event on Saturday at the Treasure Island Resort and Casino in Redwing, Minn. The end came just 53 seconds into round one.

The two featherweights traded from the start. Buck then latched onto Johnson’s back, cinched a standing choke and finished it on the ground.

Spawned by the Minnesota Top Team, Buck has rattled off back-to-back victories. The Burnsville, Minn.-based featherweight was released by the WEC following losses to Brandon Visher and former Brazilian jiu-jitsu world champion Fredson Paixao. None of Buck’s last 12 fights have gone the distance.

Beer, who christened his professional career with wins in his first nine fights, got himself back on track with the victory. The British Association of Mixed Martial Arts veteran entered the match on the heels of consecutive defeats to Matt Sellars and Rob Sinclair. Beer has finished six of his 10 career wins by knockout or technical knockout.

A qualifier on Season 9 of “The Ultimate Fighter,” Lawson was eliminated in the quarterfinals by Jason Dent and received his walking papers from the UFC following the show. The 32-year-old later appeared under the Sengoku Raiden Championship banner in Japan, where he was submitted by reigning SRC featherweight king Hatsu Hioki with a first-round triangle choke.

Quick Hits: UFC veteran Alexandre Barros notched a split decision victory over Henrique Oliveira at a Showtime Fights event on Saturday at the Hard Rock Café in Rio de Janeiro, Brazil. He has posted a 4-2 record since being released by the UFC following his January 2009 technical knockout defeat to the world-ranked Martin Kampmann … Shooto Poland veteran Michal Elsner submitted Ireneusz Mila with a triangle choke 2:51 into round one of their encounter at MMA Challengers 6 on Sunday at the Spodek Arena in Katowice, Poland. Elsner has won three fights in a row … King of the Cage alum Derek Boyle needed less than two minutes to dispatch Casey Kelly in the Too Tuff 1 main event on Saturday at the Bully’s Sports and Entertainment Centre in Lethbridge, Alberta, Canada. Kelly met his demise inside a rear-naked choke 1:51 into round one. Boyle has recorded victories in each of his last three appearances … Gladiator Challenge veteran Mike Crisman submitted John Wood with a second-round guillotine choke under The Ultimate Combat banner on Friday at Club Vegas in Salt Lake City.
More Weekend Event Coverage » • ‘Bigfoot’ Batters Fedor, Forces Stoppage
• Strikeforce Prelims: Cholish Kneebars TUF 12 Alum Stevens
• Olympian Vila Rolls, ‘Da Da 5000’ Calls Out Kimbo at ‘New Gen 4’
• Heckman Chokes Jackson, Younger Alvarez Crushes Smith at LITC 7