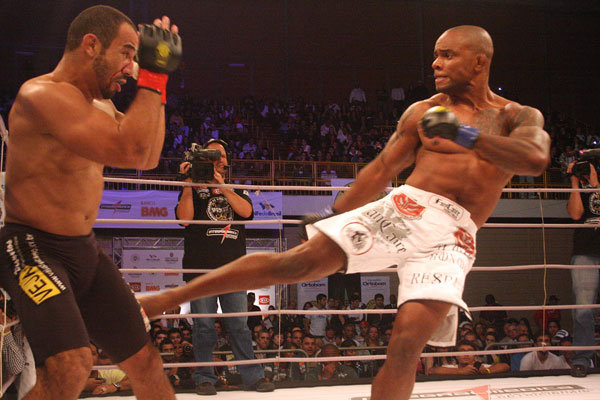 After 30-plus fights, Wendell Oliveira (right) is headed to the UFC. | Photo: Gleidson Venga/Sherdog.com


Brazilian welterweight Sergio Moraes has been forced to withdraw from his Ultimate Fighting Championship return.

Moraes suffered a knee injury in training and has been replaced by countryman Wendell “War Machine” Oliveira, who will make his Octagon debut against Santiago Ponzinibbio at UFC Fight Night “Silva vs. Arlovski 2.” Sherdog.com confirmed the switch with a source close to the bout after an initial report from Combate.

Headlined by a heavyweight rematch between Antonio Silva and Andrei Arlovski, the UFC Fight Pass-streamed card takes place Sept. 13 at Nilson Nelson Gymnasium in the Brazilian capital of Brasilia.

Moraes has not competed since August 2013, having also pulled out of a scheduled bout against Zak Cummings last November.

Oliveira enters the UFC on a seven-fight winning streak, though he suffered an exhibition loss to Warlley Alves in the preliminary round of “The Ultimate Fighter: Brazil 3.” Argentina’s Ponzinibbio will look to rebound from a November decision defeat against Ryan LaFlare, which snapped a seven-fight unbeaten run.