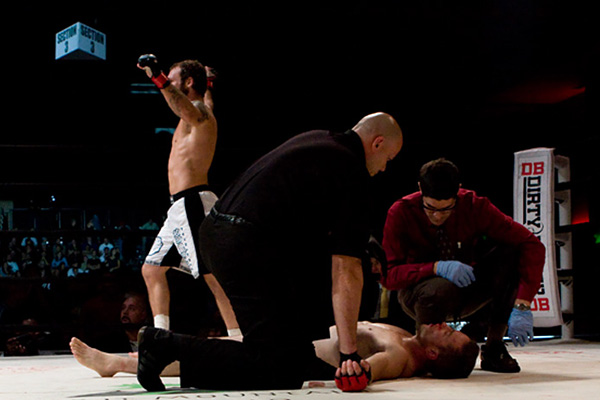 The champion scored an emphatic hip toss early in the first, but Nelson reversed the position and briefly had Wilson's back. The Team Quest standout recovered and then used a Kimura grip to sweep Nelson, landing on top and delivering ground-and-pound. Back on their feet, both fighters traded combinations as the round ended.

Wilson landed hard kicks to his opponent's lead leg and torso in the second round. Nelson answered with his own combinations, his nose now trickling blood, but that returned aggression would eventually be his undoing. Wilson caught one of Nelson's body kicks and followed with a hard sweep, slamming Nelson on his back with tremendous velocity. From Nelson's guard, Wilson landed heavy left hands, forcing the referee to call a halt to the bout 3:16 into the second round.

“I was practicing the catch [for this fight],” said Wilson. “When I stepped through, I let go of the leg, and I put my forearm on his diaphragm. So when I landed, it drove all the air out of him. After the first two punches, his mouthpiece came out. He was unconscious before the last three punches.”

The noticeably thicker champion controlled the pace standing before executing an outside leg trip to take the fight to the mat. Queen delivered shots from the half-guard, as Hayes' corner desperately screamed at him to stall for a standup. Hayes did well to recover full guard, but the referee stood them up with only 10 seconds remaining in the round. Just as the timekeeper slapped the mat, Hayes connected with a hellish right hand that snapped Queen’s head around and relieved him of his heavyweight strap.

“I didn't actually think I'd catch him with something that big,” said Hayes. “But that works.”

In a welterweight bout, newcomer Jake McKnight easily submitted Northwest Training Center fighter Darrel Fenner with a rear-naked choke 4:09 of the first round. After stuffing a four minute-long single leg, McKnight got Fenner's back and locked up the submission.

Team Quest product Daniel Stewart defeated Will Crochane in an evenly matched heavyweight contest. After a takedown, Stewart grabbed an extended arm, flipped his opponent over and secured an armbar 2:53 into the first round. 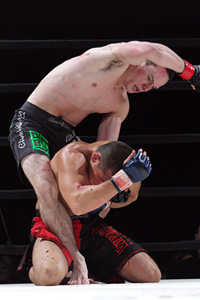 In a heavyweight tilt, Kyle Kenny dominated Jon Krohn, submitting him with a straight armlock 2:34 into the first round.

Prior to the professional fights, two famous sons made some noise in amateur bouts. Colt Toombs, son of WWE Hall of Famer “Rowdy” Roddy Piper, used sharp and versatile strikes to bloody and defeat a game Matt Slosser by unanimous decision in a featherweight bout.