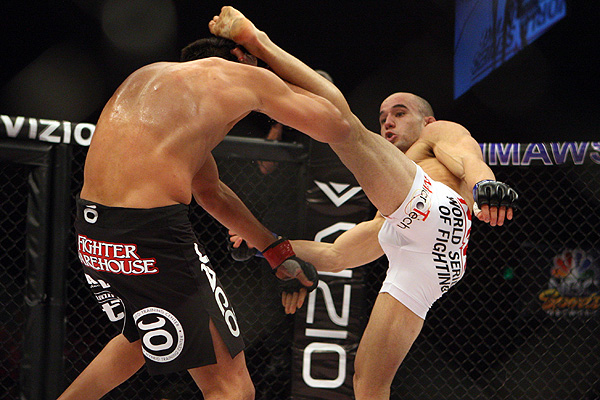 Marlon Moraes was on schedule to make 135 pounds last week for his World Series of Fighting bout against Miguel Torres, but when Hurricane Sandy struck where he was staying in New Jersey, things got tougher.

“The storm didn’t really affect my training camp, but this last week, I needed a gym. I needed everything to cut weight,” Moraes told the Sherdog Radio Network’s “Rewind” show. “But … I had no gas, nobody to go to the gym, no gyms open.”

The Brazilian, who was training with Frankie Edgar in Toms River, N.J., weighed 150 pounds on the Monday before the fight. With nowhere to work out, he ended up jumping a lot of rope in the house he was staying in and also resorted to running around the kitchen.

Moraes made it, and he also scored the biggest win of his career the next day by outpointing Torres for a split decision.

“I’m so happy to fight against him,” said Moraes, who expressed considerable respect for the former WEC bantamweight champion. “I think this fight’s going to bring me into the mix now. Now I’m in the mix.”

Despite his excitement after knocking off Torres, though, Moraes is still moved by the damage he witnessed in New Jersey.

“It was crazy,” he said. “I’ve never seen something like that. I’m from Brazil and I saw a couple of things in Brazil, but man, it’s crazy. The hurricane is something unbelievable.”

Moraes actually lives in Jupiter, Fla., but after spending his training camp in New Jersey, he wants to help out the area however he can.

Listen to the full interview (beginning at 1:37).