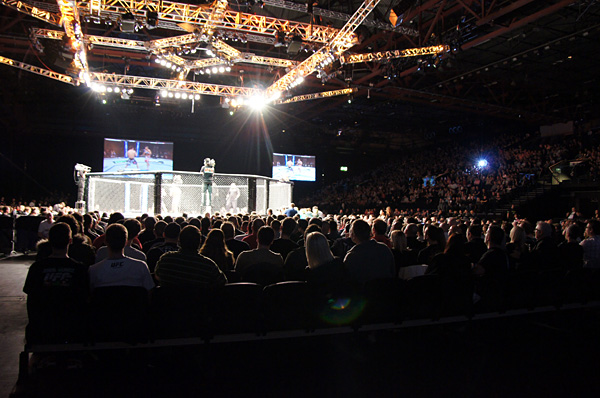 By beating Hector Lombard at UFC 149, Tim Boetsch thinks he spoiled the UFC’s plans for the middleweight division. More specifically, he believes the UFC was going to give Lombard the next title shot if Lombard had beaten him.

“Honestly, I think they were going to,” Boetsch told the Sherdog Radio Network’s “Beatdown” show. “In the pre-fight press conference, Dana [White] had said that he had all the answers for the middleweight division, that he was going to make the announcement Saturday night. I believe what happened is I threw a wrench into all of that, honestly.”

Boetsch edged Lombard via split decision, derailing the Cuban’s 20-fight win streak. The bout wasn’t particularly entertaining, but much of the blame for that has been pointed at Lombard for abandoning his typically aggressive style.

“It never really came in the fight, and that actually sort of threw me off a little bit,” Boetsch said. “Over the past couple months of training, I trained anticipating that bull rush forward. I’d worked on a lot of sidestepping and throwing off of his movement coming in, and it just never happened in the 15 minutes. It kind of had me thrown for a loop. I was anticipating that the whole time.”

With all the criticism leveled at Lombard, though, Boetsch may not be receiving his fair share of credit.

“I’m a bit baffled as to how I fly under the radar after these successful fights that I’m having, but if that’s the way it’s got to be, that’s fine by me,” he said. “Like I’ve said before, I’ll beat whoever they put in front of me and then eventually, if I can beat everybody they put in front of me, people will have to talk about me. I hope.”

After the fight, Boetsch expressed doubt that he would be getting the next shot at champion Anderson Silva. That doesn’t mean he thinks he’s not worthy, however.

“On paper, I think it’s hard to argue that anybody is really in front of me,” Boetsch said. “If you look at the last two guys that I’ve beaten, I think that’s a pretty good resume for a title shot. I’d like to see the argument for who I need to beat to actually be next in line or whoever they think is in front of me, whose credentials are better. Let’s do a little fighter math here and look at who they’ve beat that makes them more deserving. I think I’ve got to be close to the next guy in line.”

Boetsch is undefeated as a middleweight, having won all four of his fights in the division. Still, he vows to remain patient while waiting on his crack at the gold.

“I don’t feel disrespected,” he said. “I feel like you deserve what you earn, and if they don’t feel like I’ve earned that title shot yet, I’ll beat somebody else. I’ll beat whoever it takes to get there. Then I plan on getting that strap when it’s my turn.”