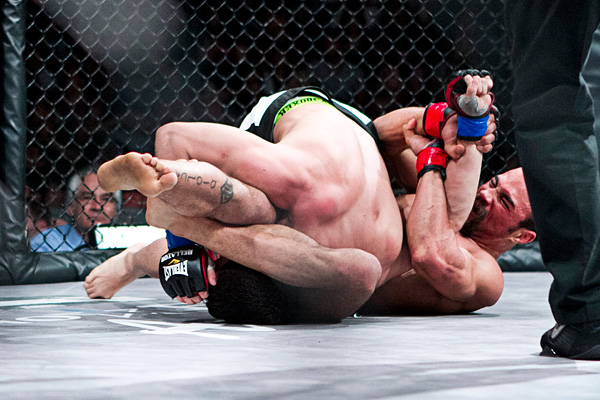 Woodard submitted Freire with a gruesome second-round kimura in the Bellator Fighting Championships Season 6 lightweight tournament at Bellator 62 on Friday at the Laredo Energy Arena in Laredo, Texas. The tough-to-stomach finish went down 1:46 into round two, as the man they call “Cupcake” cranked on the elbow until it gave way. Freire tapped out immediately.

Woodard and Freire went at one another from the start. “Pitbull” had the mustached Montanan on his heels in the first round after cracking him with consecutive left hooks. Woodard weathered the storm, made it to the horn and regrouped in his corner. The one-minute respite between rounds proved invaluable.

The two lightweights lost none of their aggression in the second period, as they swung wildly at one another. Woodard clipped his foe with a knee, bullied his way into his guard and kept him on the defensive with heavy shots from above, one of which struck the canvas with an audible thud. Eventually, Woodard trapped Freire’s left arm, rolled back into top position and finished it there, visibly dislocating the Brazilian jiu-jitsu black belt’s elbow.

A Team Nogueira representative, Freire (10-3, 3-2 BFC) had never before been finished. His loss was eerily similar to the one suffered by one of his mentors, Antonio Rodrigo Nogueira, at UFC 140, where the former Pride Fighting Championships heavyweight titleholder yielded to a Frank Mir kimura in Toronto. A. Hemingway
Hawn's right hand ripped Tirloni.
Rick Hawn needed a little more than half a round to announce his presence at 155 pounds, as the 2004 Olympic judoka stopped Ricardo Tirloni on punches 2:36 into the opening round of their quarterfinal showdown in the Bellator Season 6 lightweight tournament.

Hawn remained patient, battled Tirloni (14-2, 1-1 BFC) in the clinch and ate a few leg kicks for his troubles, but he never stopped pressing forward. As the first round reached the midway point, Hawn (12-1, 4-1 BFC) split the air with a searing right hand that dropped his foe where he stood. Follow-up punches and hammerfists finished it, as Hawn put an end to the Brazilian’s streak of 11 consecutive wins.

“The [lightweight] guys are a lot smaller than the welterweights, obviously,” Hawn said, “and I noticed the difference.” A. Hemingway
Weedman paid tribute to Jason Von
Flue with his victory.
Brent Weedman submitted “The Ultimate Fighter” Season 12 alum J.J. Ambrose with the rarely used Von Flue choke -- named for UFC veteran Jason Von Flue -- 3:26 into the second round of their Bellator Season 6 lightweight tournament quarterfinal. The victory put the brakes on a two-fight losing streak for Weedman (19-7, 5-2 UFC), a former welterweight who downshifted to 155 pounds without a hitch.

Weedman established an early foothold in the match, as he landed the two most telling strikes of the first round: a left hook that floored Ambrose inside the first 30 seconds and an upkick that sent his foe’s mouthpiece flying. The kick allowed Weedman to set up shop from the mount, a dominant position from which he threatened Ambrose with a series of rear-naked chokes.

Though none were successful, they erased some solid work from Ambrose (17-4, 0-1 BFC), including a powerful takedown and a tight brabo choke.

In round two, Weedman again transitioned to top position, trapped his opponent in the mounted crucifix and eventually slid into position for the fight-ending choke. With that, Ambrose’s seven-fight winning streak was a thing of the past.

“He gave it to me three or four times,” Weedman said. “I figured it was only a matter of time.” Silva controlled the standup between the two lightweights with power, speed, precision and variety. He did his best work in round two, where he staggered Nazare with a heavy uppercut, swarmed his countryman on the fence and opened a cut over his right eye with a volley of power punches.

Nazare delivered takedowns in all three rounds but was surprisingly ineffective on the ground, where the three-time Brazilian jiu-jitsu world champion never put Silva in any real danger.

“My focus now is training more and improving my MMA game,” Silva said. “Fighting in the U.S. is a dream come true, and Bellator provided it for me.” The victory did not come easy, as Jansen had to survive a harrowing second round in which he was mounted twice and trapped in a rear-naked choke. The 32-year-old Oregon native freed himself from multiple guillotine chokes from Kirwan (9-4, 1-1 BFC) during the competitive 15-minute encounter and finished all three rounds in top position, perhaps swaying the decision from the judges. A. Hemingway
Martinez mopped up Frey.
Rad Martinez won for the third time in as many appearances, as he stopped Douglas Frey on first-round punches in their undercard showdown at 145 pounds. Frey (10-8, 1-1 BFC) succumbed to the blows 4:08 into round one.

Martinez (12-2, 2-0 BFC) spent much of the brief bout in pursuit of his opponent. A left hook staggered Frey and another sent him to the canvas. Once there, Martinez settled into half guard, postured up to punch and let his fists go until the referee was forced to intervene. The 25-year-old Utah native now has five first-round finishes on his resume. Andrew Hemingway
Spencer choked out Daily.
Sean Spencer made the most of his promotional debut, as he submitted Joseph Daily with a second-round rear-naked choke in a preliminary welterweight encounter. Dailey (4-3, 0-1 BFC) met his end 84 seconds into round two.

Spencer (8-1, 1-0 BFC) set the tone from the start, as he roughed up Daily with uppercuts, countered effectively and landed a pair of takedowns inside the first five minutes. He struck for another takedown early in the second round, transitioned to Daily’s back and cut off the escape route with a body triangle. The choke followed soon after and, though he initially gave referee Kerry Hatley the thumbs up sign, Daily was forced into submission once Spencer readjusted his grip.

Finally, featherweight Chris Jones (7-1, 1-0 BFC) recorded his sixth win in as many outings, as he eked out a split decision over Steven Peterson, earning 29-28 scores from judges West and Drake-Browning. Armstrong saw it 30-27 for Peterson (6-2, 1-1 BFC); and Luis Vega (8-2, 1-0 BFC) extended his streak of consecutive wins to seven, as he submitted Sonny Luque (1-3, 0-1 BFC) with an arm-triangle choke 3:43 into round one of their catchweight affair.