As a two-time collegiate All-American wrestler at the University of Missouri, Strikeforce welterweight prospect Tyron Woodley has competed on big stages before.

So when Woodley -- who has fought in three Strikeforce Challengers events -- takes on Brazilian submission ace Andre Galvao in a featured matchup at Strikeforce “Diaz vs. Noons 2” on Oct. 9 in San Jose, Calif., he may not have any pre-fight jitters, even though it will be his first main card appearance for the organization.

“Getting to the main card doesn’t add any pressure on me,” says Woodley, a member of the American Top Team’s talented roster. “It just shows that I’m getting closer to a title shot. It’s good in that Strikeforce is showing more faith in me. I do think every fight that’s coming up for me is the biggest of my career because wins and losses dictate whether you go to the top. If you lose, you have to get two or three wins to get back to the top.”

Woodley is unbeaten in his mixed martial arts career, with six submissions among his eight victories. The 28-year-old is coming off a split decision victory over Team Quest representative Nathan Coy at Strikeforce Challengers 8 in May; it was the first time Woodley was forced to go the distance. Woodley secured the first takedown in the fight, but Coy -- an All-American wrestler at Oregon State -- came on as the fight went along, landing some strikes and scoring several takedowns of his own. The fighters traded takedowns in the third round before Coy pinned his opponent against the fence and dropped blows to the head and body, grinding down Woodley as the match ended.

“I learned a lot [from the Coy fight],” says Woodley. “I matured and gained a lot from that fight. I learned that you have to be able to fight in multiple dimensions and make adjustments in the middle of a fight. I landed some straight rights early on and started waiting on that. I gave him a chance to feel like he still had a chance in the fight. If I did what I wanted with takedowns and ground-and-pound, that wouldn’t have happened. I’m just happy I was able to learn so much from a victory instead of a defeat.” 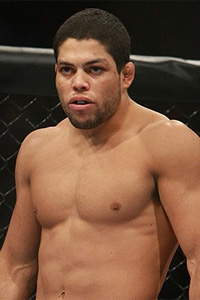 Dave Mandel/Sherdog.com
Woodley will take on Galvao.
Galvao, a Team Nogueira member, will present a tough challenge for Woodley. A three-time Abu Dhabi Combat Club Submission Wrestling World Championships medalist, the 28-year-old sports four finishes -- one knockout, three submissions -- among his five victories. He has never been stopped in his six professional fights, as his lone loss was a controversial split decision setback at the hands of Jason High in the semi-finals of the Dream welterweight grand prix in July 2009.

A seven-time Brazilian jiu-jitsu world champion, Galvao last appeared at Strikeforce “Houston” in August, when he stopped Jorge Patino on a third-round technical knockout. Despite turning professional a little more than two years ago, he already holds wins over Luke Stewart, John Alessio, Jeremiah Metcalf and Mikey Gomez, four men who have a cumulative winning percentage of .644.

“[Galvao] is tough,” says Woodley. “He’s got a good jiu-jitsu background, and my main suit is wrestling, so I have to be careful if I put him on his back. I’m not going out there trying to submit him, and he’s not going to get in a takedown war with me. When you fight somebody like Galvao, you definitely do work on things like positions and submission defense, but what you don’t want to do is spend a lot of time on trying to play catch-up to his jiu-jitsu because you won’t be able to do that. I just have to play to my strengths while trying to work on my weaknesses, as well.”

A victory over Galvao would push Woodley that much closer to a shot at the Strikeforce 170-pound championship, which will be decided in the main event, when champion Nick Diaz defends against Karl James Noons. However, Woodley knows he cannot afford to look past the dangerous Galvao.

“For me, it’s about this fight, not just about fighting for the world title,” says Woodley. “Nobody’s seen what I can do yet. If I do what I’m capable of and a little more, everything will be OK. I don’t think I’m far off [from a title shot] -- one fight, maybe two. But I can’t see that far because I have somebody blocking my view. Once I get past that guy, I’ll take a look at things like a title shot.”