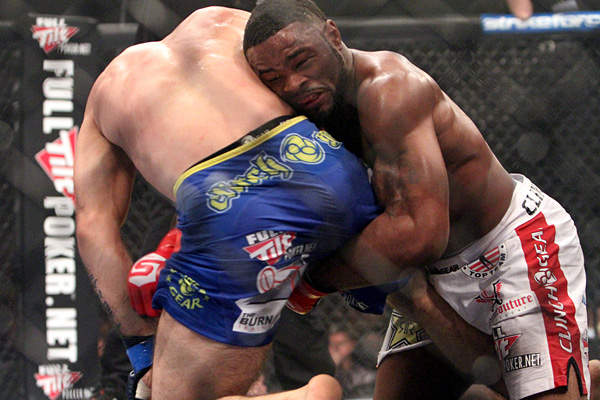 An emerging presence at 170 pounds, Woodley trapped Saffiedine repeatedly in the clinch, threw strikes when necessary and scored with some well-timed takedowns, as he earned a unanimous decision victory in the Strikeforce “Challengers 13” headliner on Friday at the Nashville Municipal Auditorium in Nashville, Tenn. All three judges scored it for the undefeated Woodley: 30-27, 29-28 and 29-28.

“I did well,” said Woodley, who moved to 6-0 inside Strikeforce. “Tarec’s a very tough guy, has some power, got some pop, switches his stance, a difficult guy to find his timing on. I endured. I pressed him. I think I kept the pressure on him and stopped him from doing a lot of striking. I did a good job tonight.”

A two-time All-American wrestler at the University of Missouri, Woodley leaned heavily on his base. He short-circuited Saffiedine’s considerable stand-up skills, as he kept him pressed against the cage and to the mat for much of the 15-minute encounter. Woodley wound up in bottom position briefly in the third round, but retook control with a takedown off an attempted head kick from Saffiedine. The Belgian’s offensive notes were few and far between, Woodley answering him with the clinch at virtually every turn.

The defeat snapped a three-fight winning streak for Saffiedine, a Team Quest representative who still has never been finished as a professional. 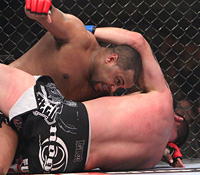 Two-time Olympic wrestler Daniel Cormier kept his perfect professional MMA record intact, as he showcased his diverse skill set in a unanimous decision victory over International Fight League veteran Devin Cole. Scores were 30-27 across the board for Cormier, who went the distance for the first time in his career.

Cormier was brilliant, both standing and on the ground, as he whacked Cole with an assortment kicks and punches when upright and scored with takedowns in each round. The American Kickboxing Academy representative was never threatened by Cole, who entered his promotional debut on a five-
fight winning streak.

Crisp and diverse with his offense, Cormier continued to show improvement in his stand-up game. On the ground, he was on another level, as he chopped into Cole with heavy ground-and-pound and attacked with an attempted second-round rear-naked choke. To his credit, Cole never wilted.

“He did an incredible job,” Cormier said. “He fought hard. I don’t think we expect that kind of performance at AKA. I feel like I let them down. It was a hard fight.”

Former University of Tennessee linebacker Ovince St. Preux posted his seventh consecutive victory -- it was his third in seven weeks -- with a unanimous decision against Ron “Abongo” Humphrey in a light heavyweight showcase. All three cage-side judges scored it 30-27 for St. Preux.

Stout left hands from the lanky St. Preux proved to be his most valuable weapon, as he wobbled Humphrey on more than one occasion. The 27-year-old Knoxville, Tenn., native also showed his superiority on the ground, as he outwrestled and out-grappled Humphrey, who mustered only a few attempted guillotine chokes from his back.

Still, Humphrey had his chance. Late in the second round, he cornered the fading St. Preux against the cage and battered him with a series of power punches. St. Preux survived to see round three, where he put the finishing touches on another victory. He now owns a perfect 4-0 mark inside Strikeforce. 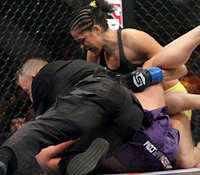 An Edson Carvalho protégé, the 22-year-old Nunes uncorked a quick inside leg kick to start and then fired away with punches. Her initial burst put Budd on her heels before a straight left hand dropped the Canadian where she stood. Seven unanswered, rapid-fire hammerfists from Nunes punctuated the finish.

Nunes, a Bitetti Combat veteran, has stopped six consecutive opponents on strikes, four of them inside one round.

A 35-year-old American Top Team representative, Ferguson weathered a quick burst from Richard at the open, as the South Carolina-based wrestler secured a takedown inside the first 11 seconds and transitioned to Ferguson’s back when the judoka rolled for a leg lock. However, Richard’s attempts at a rear-naked choke went unrewarded against the Brazilian jiu-jitsu black belt, as Ferguson moved into top position and turned on his ground-and-pound.

Clearly winded, Richard -- who was deducted a point in the first round for repeatedly discarding his mouthpiece -- had little to offer in round two. He landed what appeared to be a kick to the groin a little more than a minute in, as Ferguson doubled over in pain, back pedaled and dropped to his back. However, the referee allowed the match to go on. Operating from the bottom, Ferguson trapped Richard’s left leg, extended the kneebar and coaxed the tapout.