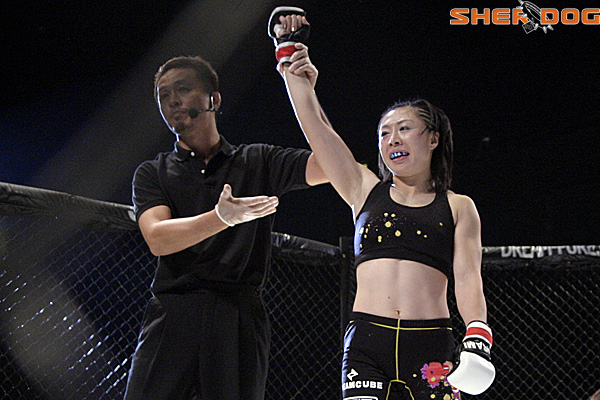 
Japanese strawweight Emi Fujino has signed with the World Series of Fighting. Terms of the deal were not disclosed.

A Pancrase, Sengoku and Deep alum, “The Kamikaze Angel” trains out of the Wajutsu Keishukai Gods camp in Japan, where she trains alongside Mei Yamaguchi and hones her skills under coaches Katsunori Tsuda and Taiyou Nakahara. She has compiled a 13-7 record as a professional, with all seven of her defeats coming by decision.

Fujino started training shortly after college but had no intention of fighting competitively.

“I started MMA for the sake of exercising to lose weight,” she said. “I saw it on TV and thought that I’d like to give it a try, so I went to a gym.”

In order to diversify her MMA game, Fujino has also tried her hand at professional wrestling, kickboxing and shoot boxing. She kicked off her mixed martial arts career in 2004, posting eight straight victories over a three-year period. A series of decision losses followed, but Fujino has rebounded to win five of her past eight bouts. All 20 of her fights have taken place in Tokyo, including a unanimous decision defeat to teen-aged phenom Mizuki Inoue under the Deep banner in November.

"I’ve already faced almost everyone that I can in Japan, so I decided to go outside Japan to find other strong fighters to face,” Fujino said. “It has always been my dream to fight overseas, so I’m truly thrilled [to sign with the World Series of Fighting]. I want to fight strong fighters and see how well I can do on a world-level. My wish is that many people see me fight.”