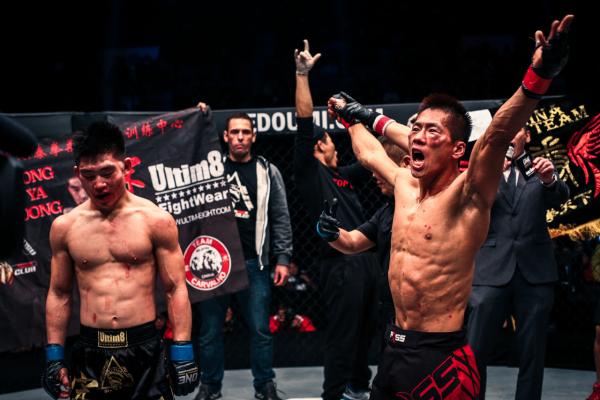 China Top Team bantamweight Xian Ji made a successful One Fighting Championship debut, as he captured a unanimous decision from the previously unbeaten Yadong Song in the One FC 24 “Dynasty of Champions” main event on Friday at the Olympic Sports Center Gymnasium in Beijing.

Ji (12-2) utilized relentless pressure throughout the 15-minute affair. The 27-year-old floored Song with a left hook in the first round, struck for a takedown in the second and nearly finished it in the third, where he tore into the 20-year-old prospect with a variety of strikes: Hooks, uppercuts, head kicks and knees all found their marks. Song (4-1) reached the final bell battered and bloodied, losing for the first time as a professional.

In the lightweight co-main event, Adrian Pang submitted Vincent Latoel with a third-round guillotine choke, as he won for the sixth time in seven appearances. Latoel (15-16-2) conceded defeat 2:15 into round three.

Pang (21-8-2) executed takedowns and scored with ground-and-pound in all three rounds, keeping the Dutchman off-balance and unsure of himself. After a referee restart in round three, Latoel moved in for an ill-advised takedown attempt, only to find himself ensnared in the guillotine. Pang secured the choke and forced the tapout, recording his first submission in more than seven years.

Meanwhile, Li Kai Wen downed Wang-Yai Wei by unanimous decision in the One Fighting Championship Beijing featherweight tournament final. Wen (2-0) -- who advanced to the 145-pound final by putting away He Nan Nan (1-2) with punches 2:19 into the first round of their semifinal -- leaned on a strong jab and effective sprawl, as he circled out of danger and kept himself away from the cage. The 19-year-old had Wei (1-1) reeling with a left hook and subsequent flurry in the first round but eventually settled for the decision. The 21-year-old Wei punched his ticket to the final by stopping Li Gen (0-1) with punches and elbows 2:26 into round one of their semifinal.

Elsewhere, Li Wei Bin earned a unanimous decision from Wang Wei in the One Fighting Championship Beijing flyweight tournament final. Bin (2-0) -- who qualified for the 125-pound final by submitting Hao Yi Jie (0-1) with an armbar 2:51 into the first round of their semifinal -- leveled Wei with a two-punch combination in the first round, weathered an encounter with a counter right hand and turned up the heat in the second. There, Wei (1-1) was little more than target practice. Bin landed a front kick to the face, another to the gut and later attacked with a merciless string of leg kicks. Wei advanced to the final with a unanimous decision over Liu Xu (0-1) in their semifinal.

In other action, undefeated Polish export Michal Pasternak (11-0) pocketed a unanimous decision against Rafael Silva (39-15) in their middleweight clash, and Ariel Sexton (9-3) submitted Anvar Alizhanov (3-1) with a reverse triangle keylock 3:18 into the first round of their battle at 155 pounds. Sexton replaced Willy Ni on short notice.
SHARE ON FACEBOOK SHARE ON TWITTER
Related Articles
Latest News
+ VIEW MORE