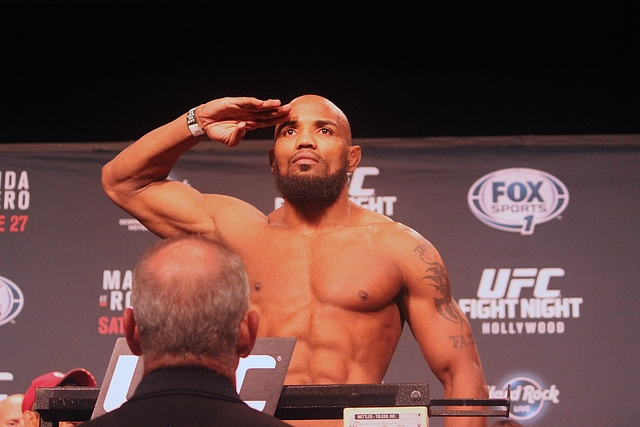 
For most of Saturday night’s post-fight press conference, Yoel Romero was a man of few words.

Whether it came to calling out future opponents or describing his explosive victory over Lyoto Machida in the UFC Fight Night headliner, the powerful Cuban middleweight was concise and not especially revealing.

However, a night that should have been about Romero earning the signature triumph of his career took on a decidedly different tone when the American Top Team product addressed the fans in the aftermath of his third-round stoppage victory. While the language barrier made the exact nature of Romero’s message unclear, his comments were nonetheless controversial enough to immediately set social media afire with outrage.

Many believed that the man known as “Soldier of God” used his microphone time to decry the legalization of gay marriage in the United States. Once he was made aware of the backlash, Romero attempted to clarify his post-fight remarks.

“I wouldn’t be the type of person to critique anybody. I have to look at myself first; be a better person -- to be able to love people. What I was trying to say, the United States, thank you for giving me the American dream,” he continued. “There is no better country because it is blessed by God... This country was made by Christian people, that means it’s blessed by God.”

While Romero might have stumbled on the microphone, inside the Octagon he was in peak form. The 2000 Olympic silver medalist remained patient as Machida utilized his trademark movement for two competitive rounds. In the third stanza, the Cuban seized the moment, taking the ex-light heavyweight king down and moving to half guard in one explosive sequence. Moments later, he was battering Machida with brutal elbows from above, forcing a halt to the contest 1:38 into the period. It was Romero’s fourth TKO finish in the third round during his UFC tenure.

“Maybe that’s when I start to let loose more,” Romero said, when asked to explain his tendency to turn up the heat in the third frame of his fights.

With the emphatic victory, Romero solidified his place in the upper echelon of the middleweight division. A title shot does not appear imminent, however, as Luke Rockhold is expected to receive the next crack at reigning 185-pound kingpin Chris Weidman. Rebooking a date with Ronaldo Souza, a matchup that has been repeatedly snakebitten by bad luck, could be a possibility in the meantime.

Romero himself does not seem to have a preference.

“I’m a fighter for the best organization in the world, the UFC,” he said. “Whoever they give me, I’ll take.”

As he continues to gain stature in that organization, Romero could have more opportunities to speak his mind down the road. If that happens, he doesn’t plan on biting his tongue.

“No, because I know what I have in my heart,” he said.