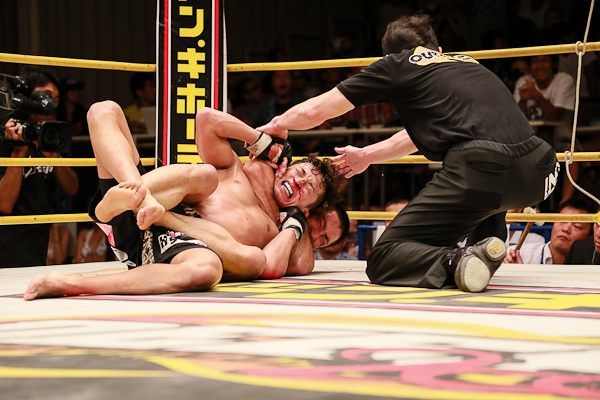 Though Maeda captured the title in February by blitzing Takafumi Otsuka, Wada gave the incumbent champ much more of a fight. 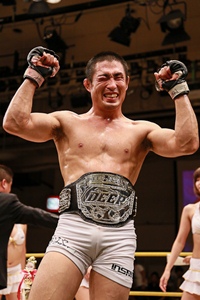 Taro Irei
Maeda stayed champ at 135.
“I wanted to show how much a difference there was between us in skill, but as the fight went on, he got stronger,” said Maeda, post-fight. “This time, I trained so hard, I felt like it was finally enough, so I didn’t feel nervous about being unprepared.”

The champion soundly controlled the opening frame, dragging the challenger to the mat after catching a knee. Maeda handily dominated position, racking up punches from the mount and back mount, only to let Wada escape from an armbar and leg lock attempt in the round’s final seconds.

Wada rebounded in the following frame, landing knees to the body and hard right hands to the southpaw champ’s face. However, given their opposing stances, headbutts soon became a problem, particularly for Maeda, who complained about their clashing heads to referee Yoshinori Umeki. To add a further complication, Maeda and Wada’s spirited exchanges nearly landed them outside of the ring ropes on three separate occasions. Still, Maeda took control in the final minute, again stealing mount and back mount.

Maeda completed his grappling dominance over Wada in the third stanza, putting the young challenger on the canvas moments after the opening bell. While enduring the champ’s ground and pound, Wada gave up his back, and shortly after, his neck, tapping to the rear-naked choke at 2:32.

“I needed to show all the skills I had. I thought I’d have the advantage on the feet, but lately, I’m not very favored in that department. Did you guys think I won by coincidence?” asked a jovial Maeda to members of the press after the fight. 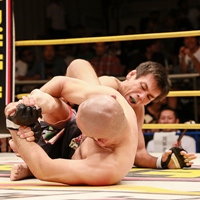 T. Irei
Imanari claimed another foot.
Also at bantamweight, former multi-division Deep champ Masakazu Imanari added another foot to add to his prodigious collection of leg lock victories. Imanari’s latest victim, former Shooto 132-pound titlist Masahiro Oishi, fell right into the trap of the “Ashikan Judan” after catching Imanari’s opening flying kick. The sly grappler immediately flopped to his back, yanking “Jackal” into an armbar. As Oishi busied himself with defending, Imanari quickly switched to a leg instead and locked up the toe-hold which elicited a tap at 1:01 of the first frame.

In yet another bantamweight clash, Daiki Hata endured a rough opening segment against Seiji Akao before turning the tide with a consciousness-rending flurry. The tenacious Akao bullied “Dj.taiki” on the feet early on, momentarily dropping the Dream vet to his posterior. After several minutes of this, however, Hata went from backpedalling to charging forward with punches, clipping Akao on the jaw and sending him flopping backward. Referee Kenichi Serizawa stepped in at the 3:20 mark, just as Hata dropped a final farewell punch on the stiffened Akao.

Rounding out the bantamweight action, a brash Yusaku Nakamura almost cruised his way to a unanimous decision win in his bout against Hirotaka Miyakawa. With hands held low, an unchallenged Nakamura sent chopping low kicks at Akao in the first five minutes, but Miyakawa eventually awoke to come out swinging in the latter half of the second frame. It was enough to steal the round on judge Samio Kimura’s card, but judges Yoshinori Umeki and Moritaka Oshiro still favored Nakamura for the majority decision. 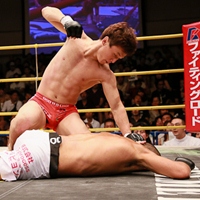 T. Irei
Choi flattened Umeda.
Elsewhere, Doo Ho Choi’s errant and severe low kick to Kosuke Umeda’s groin prematurely ended their featherweight bout -- but only momentarily. Fight fans were lucky that Deep officials decided to continue the bout later on in the evening, and luckier still that Umeda was physically able to continue at all. Restarting the clock 1:13 into the first round, a yellow-carded Choi made quick work of Umeda, catching him with a perfect right hand counter during a takedown shot. Choi restrained himself from dropping a follow-up punch to the insensate Umeda, allowing referee Kimura to call it at the 2:49 mark.

In Deep’s unique Megaton (super heavyweight) class, fan favorite Seigo Mizuguchi took a unanimous decision over Atsushi Yamada. Controlling Yamada from the judo press and back mount in the first, a winded Mizuguchi shelled up against the ropes in the second as Yamada attempted land wild punches, missing most. Mizuguchi only broke his guard to land rattling, bear-paw-sized counterpunches, landing enough to sway judges Kimura, Shoji and Serizawa in his favor.

Thanks to his combinations, Yuta Watanabe boxed his way to a unanimous decision win against fellow welterweight Yoshitomo Watanabe. Though standing toe-to-toe with AACC’s Watanabe, Alliance’s Watanabe scored and evaded far more, bloodying and wobbling the AACC product, leaving little room for doubt in judges Oshiro, Serizawa and Kimura’s minds.

At featherweight, 2010 Deep Future King tournament champ Masahito Hisataka outclassed Yusuke Kagiyama to take the decision win. While Hisataka’s rangy and quick punches wobbled Kagiyama numerous times, he persevered through his pugilistic daze to land a few punches of his own in the final frame before judges Oshiro, Shoji and Umeki ultimately gave the bout to Hisataka.

Luiz Andrade I edged Yoichi Fukumoto in their two-round lightweight bout, meeting his opponent both on the feet and stifling him from bottom when on the ground. It was enough to get judges Kimura and Oshiro’s vote, while judge Umeki remained less convinced, scoring it a draw.