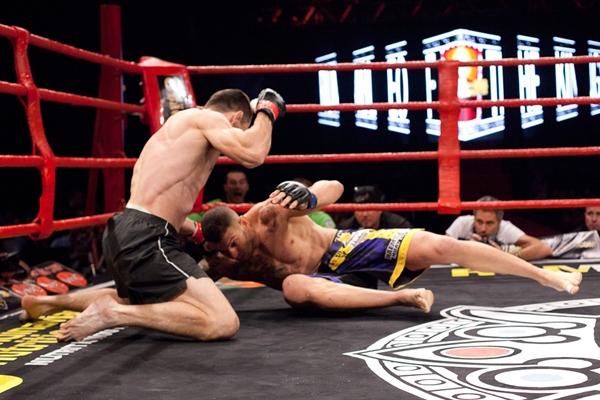 
STOCKHOLM, Sweden -- Dream welterweight champion Marius Zaromskis added to his highlight-reel kick library on Saturday at Hovet Arena, landing an unexpected forward somersault kick that led to a finish of Bruno Carvalho in their much-anticipated K-1 “Rumble of the Kings 6” showdown.

“Just kicking ass,” Zaromskis said, when asked what type of kick it was in the post-fight interview.

The fight drew much attention, as Carvalho, the Brazilian middleweight who once took on heavyweights, dropped from 185 pounds to welterweight to battle Zaromskis, the Lithuanian striker. 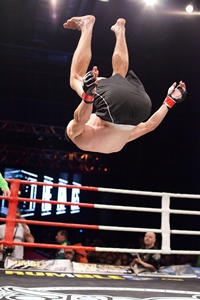 H. Wall
Zaromskis flipped over his win.
After a standup flurry to kick off the bout, the two settled for a tie-up along the cage to slow the pace. After the two reset in the middle of the cage, the bout became more of a kickboxing match, as the two fighters began to size each other up. The Lithuanian seemed to lose patience with the style of the fight and began going for big left head kicks and even a spinning back fist, none of which landed. Zaromskis pleaded with the Sweden-based Brazilian to take action.

Carvalho began using inside leg kicks to help gauge the distance of his much smaller opponent. Moments later, Zaromskis rolled in a forward somersault, using his heel to strike the Brazilian jiu-jitsu black belt firmly in the head.

The strike immediately dazed the Carvalho, and the American Kickboxing Academy-trained Zaromskis went on to take a dominant position. Carvalho tried to gather himself from his back, seeking to grasp his pouncing opponent to stay in the fight, but Zaromskis followed the fallen fighter to the ground and used punches to force a stoppage at 4:58 of the first round. The bout ends Carvalho’s eight-fight winning streak and starts a two-fight run for Zaromskis.

“I need to watch video to see what it was,” Zaromskis said of the kick. 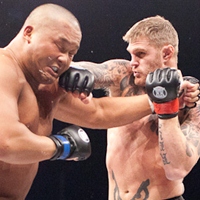 H. Wall
Kruth (right) battered Kawaguchi.
The Stockholm audience came out in droves to see K-1 and muay Thai veteran Jorgen Kruth, and the fan favorite did not disappoint, stopping Yusuke Kawaguchi of Japan with punches in the first round. The converted MMA fighter, who had been focusing on his standup in preparation for a bout with K-1 legend Ray Sefo, was forced to change direction when Sefo unexpectedly pulled out of the bout.

“I was nervous and didn’t know much about my opponent,” Kruth said.

Kawaguchi was able to take the action to the ground early in the round, but Kruth was able to escape and get the fight back on the feet. “The Last Viking” began to find his range there, landing a big right and mixing in knees in the clinch.

The Japanese fighter tired midway through the first, and the Vallentuna Boxing Camp representative began to land the heavier blows in the exchanges. The Swede began finding more success in the clinch, grinding Kawaguchi to the ground, where he mixed in unanswered punches and elbows to bring an end to the bout at the 3:18 mark.

Sillen Pounds Her Way to Victory

Hanna Sillen dominated Katrina Teer on her way to a unanimous decision in the opening bout of the night.

“The strategy was to keep the fight standing,” Sillen told Sherdog.com.

The Stockholm resident, just one of three female professionals in Sweden, ran her record to 5-1 in handing the American grappler a loss in her debut. 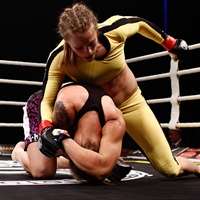 H. Wall
Sillen pounded on Teer.
Teer used her wrestling skills to take control of the bout early with a takedown. Once Sillen found her way back to her feet, she fired back with a double-leg takedown of her own, only to find herself locked in a tight guillotine. Sillen patiently waited out the submission attempt, leaving Teer deflated. The Vallentuna Boxing Camp fighter rained down punches once “Cat” gave up the hold, including damage from the mount at the end of the round that nearly forced a referee stoppage.

“I tried a three-punch combination to finish the fight but missed the last one,” Sillen said.

Rounds two and three continued the storyline that left the 29-year-old Teer battered at the end of round one. After exchanges on the feet, including an array of knees, punches and even a spinning back kick to the body, Sillen cemented the impressive performance on the top with classic ground-and-pound.