(PRESS RELEASE) -- When former NFL running back Herbert “Whisper” Goodman left the Mladhost Sports Hall in Bourgas on Saturday night, he did so under the impression that he had suffered his sixth career loss. However, Goodman was informed a few short hours later by M-1 Challenge officials that the decision had been overturned and that he had recorded his ninth career victory courtesy of a second round knockout over ex-UFC veteran Jordan Radev.

Goodman was matched up against the former Bulgarian National wrestling team member as a part of a best-of-five head-to-head match between Team USA East and the host country, Bulgaria. The overturned decision allowed USA Team East to walk away with a 5-0 shutout over the Bulgarians.

Radev was originally ruled the winner of the fight via unanimous decision. However, the 32-year old veteran was knocked out cold by Goodman with just seconds remaining in the final round. With referee Mika Sinkkonen deciding that the knockout took place a split second after the bell, the fight was turned over to the judges’ scorecards, with Radev being announced as a winner.

However, a formal appeal was lodged by Team USA East owner/manager Reed Wallace and replays showed that Goodman’s knockout transpired just prior to the end of the fight.

“Upon further video review, it has been determined that the knockout punch occurred prior to the bell ending round 2,” International Mixfight Association President Eno Alberga wrote in a released statement. “As such, the punch was legal, and is thus counted… It has been determined that the protest filed by Team USA East is upheld, and the initial ruling on this fight has been overturned. “

Goodman did not learn of Alberga’s ruling until after having returned to the team hotel. The former Green Bay Packer expressed satisfaction that justice had been served.

“I was just real curious how a referee could come in and initially stop me and all of a sudden declare him the winner? That sort of just through me for a loop,” stated Goodman. “It’s a big relief and now I can inform all the people who view my record on Sherdog’s fight finder that I am the winner.” 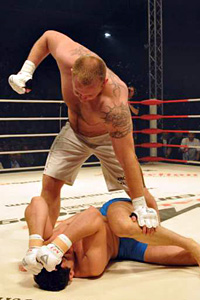 Migliaccio, a renowned competitive grappler, improved his professional MMA record to 5-0 following a first round armbar submission over Yanko Yanev, who had been a perfect 7-0 heading into the bout. Migliaccio’s victory allowed the U.S. to take a 1-0 lead.

The Americans then improved to 2-0 following Iowa-based fighter Steve Carl’s first round rear naked choke submission over Ivan Ivanoff. Like his teammate Yanev, Ivanov also tasted defeat for the first time, as his record had previously been 7-0.

Carl’s win improved his overall record to 11-1. A former sergeant in the United States Army who served in Iraq, he is no stranger to representing his country on foreign soil. Despite some apprehension about the partial Bulgarian crowd heading into the fight, Carl was very appreciative afterward about how he was received following his win.

“At first, I was very nervous because I thought it was going to be hostile crowd,” he said, before continuing, “But they were actually well-behaved and one of the best crowds I have ever fought in front of. I was very impressed.”

After Goodman’s initial decision defeat, the pressure was on former World Extreme Cagefighting veteran Charles Grigsby to seal up the victory for the U.S.

Grigsby was involved in a close battle with Atanas Dzhambazov that required an overtime round. Utilizing fleet footwork and an outstanding sprawl, the current reigning MCC light heavyweight champion improved to 18-4 after outpointing Dzhambazov in the third and final frame. Grigsby’s eighteenth career victory clinched a 3-1 victory for the U.S.

The U.S. then increased the margin of victory to 4-1 following Marshbanks slick first round heel hook submission of Emil Somoilov at 3:27 of round 1.

Marshbanks actually made the trip to Bulgaria on short notice after wrapping filming of an MMA-related reality television in Mexico just last week in hopes of fighting Combat Sambo Champion Blagdoi Ivanov. The fight never materialized but after his win over Somoilov, Marshbanks issued an open challenge to Ivanov, a Bulgarian national hero.

In addition to the headline matchup of Team USA East vs. Team Bulgaria, the sold out crowd at the Mladhost Sports Hall was treated to a total of 15 fights, including head-to-head matchups between Team Turkey vs. Germany and Team Russia Legion vs. The World Team.

After being eliminated from the 2008 season of the M-1 Challenge early last year, a revamped German squad managed to record a 5-0 shutout against Turkey.

Also, Team Russia Legion made a triumphant return to the M-1 Challenge, winning 4-1 over the World Team in their 2009 season debut.

The third edition of the “M-1 Challenge Presented by Affliction” 2009 season is currently scheduled to take place in Tokyo, Japan on April 29 featuring Japan vs. the United Kingdom, Team USA West vs. South Korea, and France vs. Spain.

Official Results of M-1 Challenge Bulgaria from March 28, 2009 at the Mladhost Sports Hall in Bourgas, Bulgaria:

* Fight was originally ruled a split decision victory in Radev's favor. M-1 Challenge regulatory officials later ruled that Goodman had knocked out Radev at 4:59 of round 1 and overturned the decision in Goodman's favor in response to an official appeal.

ABOUT M-1 GLOBAL AND THE "M-1 CHALLENGE PRESENTED BY AFFLICTION:"

Billed as the "World Cup of Mixed Martial Arts," the M-1 Challenge is a full season of MMA events sponsored by partner Affliction that showcases some of the best up and coming MMA fighters in the world. Broadcast to over 80 countries around the world, including HDNet in the United States, the M-1 Challenge pits teams of five fighters representing their respective countries against each other for international bragging rights and the title of M-1 Challenge Champions.

The "M-1 Challenge Presented by Affliction" affords MMA prospects all over the world an opportunity to test their skills, gain valuable experience at the international level, and become future stars in the sport of MMA. Fighters who succeed on the M-1 Challenge's international breeding ground will earn the opportunity to participate in major MMA events presented by M-1 Global and their promotional partners such as Affliction Entertainment.