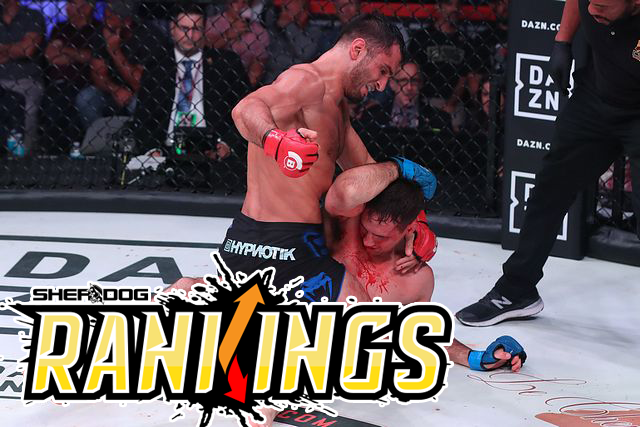 Billed as a superfight by the promotion, the Bellator 206 headliner was more of a showcase of Gegard Mousasi’s dominance.

“The Dreamcatcher” rolled past Rory MacDonald, winning via second-round TKO to retain his middleweight crown in San Jose, Calif., on Sept. 29. With his eighth consecutive win, Mousasi further solidified his place among the sport’s top 185-pounders while maintaining his No. 6 ranking in Sherdog.com’s divisional poll. McDonald, the Bellator MMA welterweight king, may have been outgunned against Mousasi, but he will remain ranked No. 5 at 170 pounds.

Meanwhile, a stellar Rizin 13 card saw top atomweight Ayaka Hamasaki maintain her stranglehold on the division with a first-round tapout of fifth-ranked Mina Kurobe, while bantamweight/flyweight star Kyoji Horiguchi gave a stellar effort in losing his kickboxing debut (Which, of course, doesn’t affect his ranking at 135 or 125 pounds).

Finally, Arlene Blencowe slammed her way to an impressive victory over Amber Leibrock in a battle of ranked female featherweights at Bellator 206. Neither Blencowe (No. 3) nor Leibrock (No. 9) changed position following their bout.