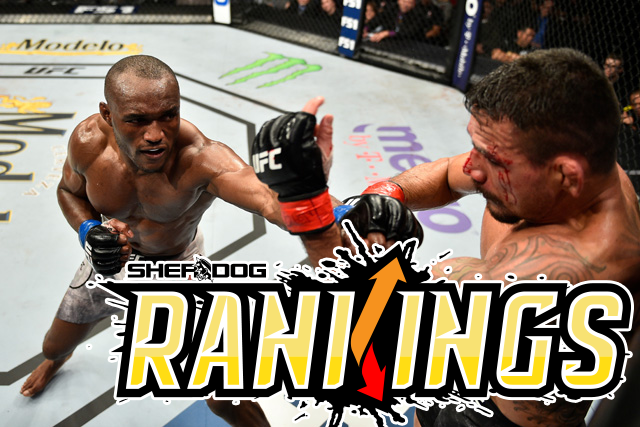 If he keeps going the way he has been, it’s going to be nearly impossible to deny Kamaru Usman his shot at Ultimate Fighting Championship welterweight gold.

“The Nigerian Nightmare” dominated Rafael dos Anjos in “The Ultimate Fighter 28” finale headliner, landing 12 takedowns and 227 total strikes en route to a clear-cut unanimous decision victory. Usman, who has won nine consecutive fights in the Octagon, stands out even in a deep division. He moves all the way to No. 2 in our rankings, while dos Anjos, who has lost two in a row after winning three straight to begin his 170-pound tenure, drops one spot to fourth.

Elsewhere, Junior dos Santos proved he is still much more than a gatekeeper, as he vanquished Tai Tuivasa in the Aussie’s backyard at UFC Fight Night 142. “Cigano” clipped his over-aggressive foe with a devastating two-punch combo, then sealed the deal with follow-up ground-and-pound at the 2:30 mark of round two. The former light heavyweight champion has won three of his last four Octagon appearances and holds strong at No. 8 in our poll. Tuivasa, after tasting defeat for the first time in nine pro outings, stays put on the heavyweight bubble.

Bidding farewell to both the UFC and the heavyweight bubble is Mark Hunt, who lost his third straight fight against American Kickboxing Academy export Justin Willis in Adelaide. Willis, on the strength of a four-bout Octagon winning streak, makes his bubble debut. Elsewhere, Tomo Maesawa claimed Deep Jewels atomweight gold with a win over Mina Kurobe, and as a result, moves into the 105-pound Top 10 at No. 9, while Wilson Reis’ triumph against Ben Nguyen moves him back onto the men’s flyweight bubble.