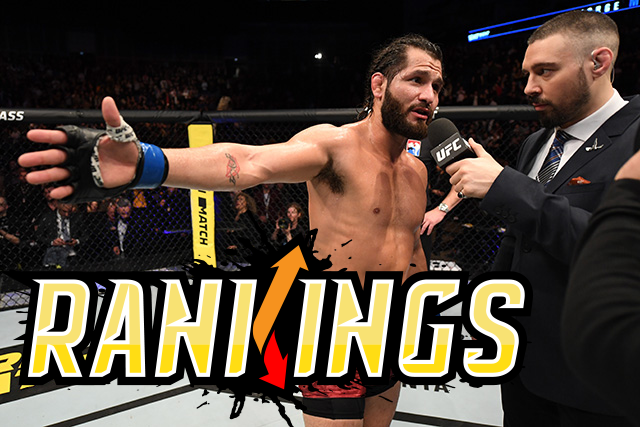 After watching him perform at UFC Fight Night 147, it’s hard to believe that Jorge Masvidal had been out of action for nearly a year and a half.

“Gamebred” returned to the Octagon in spectacular fashion on Saturday, knocking out recent title challenger Darren Till 3:05 into the second round of their headlining tilt at the O2 Arena. Masvidal wasn’t done scrapping, either. The Miami resident walked off during an interview to throw hands with welterweight contender Leon Edwards backstage shortly after his victory. While Masvidal vs. Edwards is a topic for another day, the American Top Team product is back in our welterweight Top 10 at No. 9. Till, meanwhile, could very easily be on a three-fight skid, but for now “The Gorilla” clings to the tenth spot.

Elsewhere, unbeaten light heavyweight talent Dominick Reyes wasn’t dominant at UFC London, but he did just enough to get a split verdict over former title challenger Volkan Oezdemir. Reyes still has room to grow and climbs one spot, from No. 10 to No. 9. Meanwhile, Edwards, who vanquished Gunnar Nelson in London remains on the welterweight bubble in a division loaded with talent.