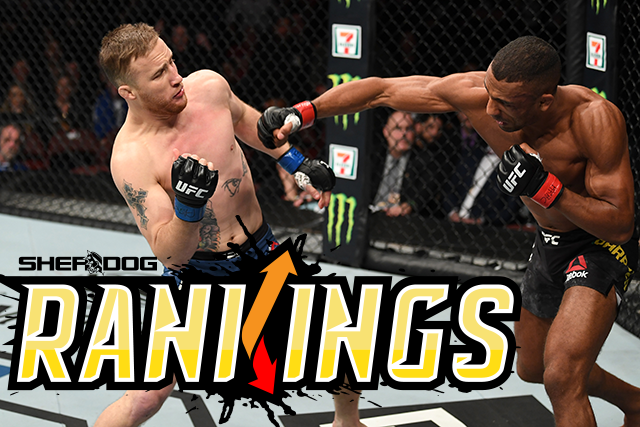 “The Highlight” earned his second consecutive victory with a resounding knockout of Edson Barboza in the UFC on ESPN 2 headliner on Philadelphia, bringing an end to the contest with a massive right hand 2:30 into the opening stanza. After back-to-back knockout losses against Eddie Alvarez and Dustin Poirier had some questioning Gaethje’s all-out approach, the former World Series of Fighting champion has re-established himself as a contender in the division.

That progress, however, does not lead to any movement in the 155-pound rankings this week for Gaethje. While Alvarez suffered a bad loss to the unheralded Timofey Nastyukhin in the opening round of One Championship’s lightweight tournament, the promotion’s policy on weight cutting means that the bout was essentially contested closer to 170 pounds. Therefore, a welterweight loss doesn’t hurt Alvarez’s stock at 155 pounds, and he remains ahead of Gaethje by virtue of a relatively recent head-to-head win over the Colorado native.

The same philosophy holds true for former UFC 125-pound king Demetrious Johnson, who submitted Yuya Wakamatsu to advance in One’s flyweight grand prix. Johnson was competing at 135 pounds and cannot boost his stock further at flyweight no matter how much he pads his record in the Singapore-based promotion. Once a year has passed without Alvarez and Johnson competing at the weight classes in which they are ranked, both will likely be removed from their respective spots.

Elsewhere, T.J. Dillashaw was removed from the bantamweight rankings after a failed drug test at UFC Brooklyn led to him relinquishing his title. The Duane Ludwig protege was suspended a year for the transgression, so barring a reduction in the sanction, he will be out of action until next January. Marlon Moraes, who will face Henry Cejudo for the vacant bantamweight belt at UFC 238, assumes the No. 1 spot in the rankings.