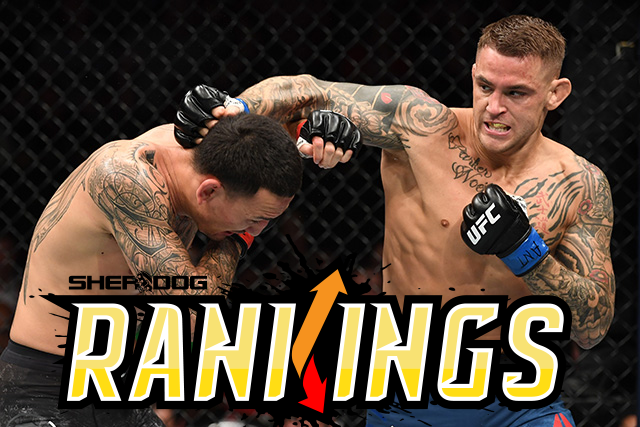 Two interim champions were crowned in Atlanta, as Dustin Poirier outpointed Max Holloway and Israel Adesanya surged past Kelvin Gastelum in 50 minutes of action that was arguably as good or better than anything fight fans have seen this year.

Poirier’s entertaining victory over Holloway likely sets up a lightweight title unification bout against Khabib Nurmagomedov down the road, but in terms of our rankings, he holds steady for now at No. 3 behind “The Eagle” and another former interim champion, Tony Ferguson.

Adesanya, meanwhile, has a lucrative showdown looming in the form of a middleweight championship unification bout against Robert Whittaker -- that fight could potentially fill a stadium in Australia. On the strength of his win over Gastelum, “The Last Stylebender” climbs to No. 3 in our latest poll while his opponent falls a spot to fourth.

Elsewhere, Alexandre Pantoja notched his third consecutive flyweight triumph with a first-round technical knockout of former title challenger Wilson Reis. That victory isn’t enough to move “The Cannibal” up, however, as he still has a head-to-head loss to ninth-ranked Dustin Ortiz. Meanwhile, Nikita Krylov avenged a previous loss to Ovince St. Preux with a second-round submission triumph, and as a result, he replaces “OSP” on the light heavyweight bubble.