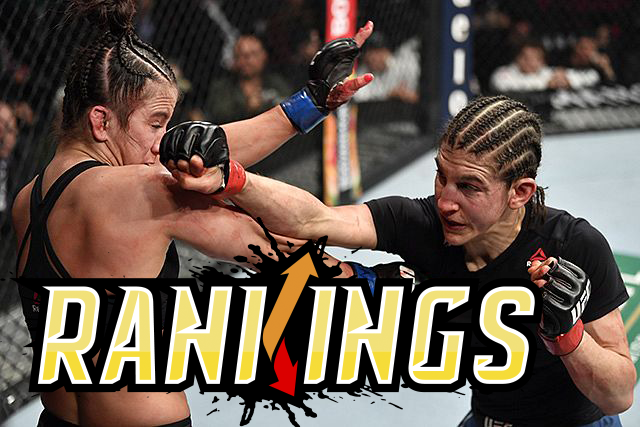 Roxanne Modafferi didn’t care that she was the biggest underdog on the UFC 246 card.

“The Happy Warrior” throttled highly-touted flyweight prospect Maycee Barber on Saturday at the T-Mobile Arena in Las Vegas, winning a lopsided unanimous verdict that left her opponent bloodied and hobbled. Heading into UFC 246, it seemed preordained that Barber would assume Modafferi’s spot in the flyweight Top 10. Instead, it’s Modafferi who ascends one spot from 10th to ninth on the basis on one of her most impressive victories to date.

Former women’s bantamweight queen Holly Holm wasn’t nearly as dominant in her rematch with Raquel Pennington in the UFC 246 co-main event, but her clinch control earned her a decision triumph and allowed her to maintain her spot at No. 3 in the 135-pound poll. Elsewhere, Diego Ferreira earned his sixth consecutive victory at UFC 246 with a submission of ex-champ Anthony Pettis, and as a result, the streaking lightweight makes his debut on the bubble at No. 15.

Finally, there is some serious movement in the flyweight division, as both Henry Cejudo and Dustin Ortiz have reached their expiration date following a year of inactivity. Both have been removed from the 125-pound rankings, allowing Brandon Moreno and Kai Kara-France to enter the Top 10, while Joshua Pacio and Yunus Evloev join the bubble at No. 14 and 15, respectively.