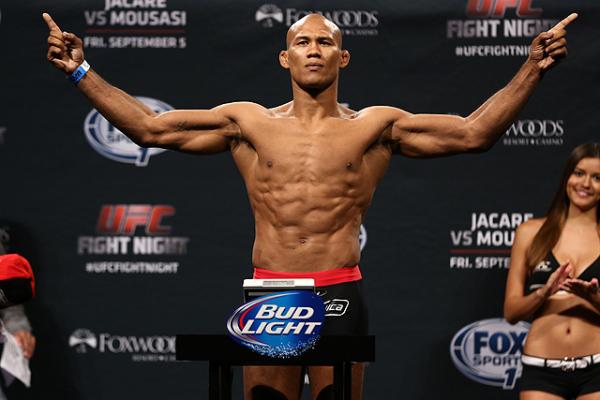 While the Ultimate Fighting Championship may not be prepared to offer him a title shot just yet, Ronaldo “Jacare” Souza is certainly making his case as a middleweight contender.

The Brazilian gator on Sept. 5 clamped down on old rival and former Strikeforce champ Gegard Mousasi, ending the main event of UFC Fight Night “Jacare vs. Mousasi 2” with a third-round guillotine choke. The win not only avenged Souza’s 2008 knockout loss to the Dutchman but also moved the jiu-jitsu expert to 4-0 inside the Octagon. While Souza stated after the fight that he believes himself to be the No. 1 contender at 185 pounds, UFC President Dana White said that the X-Gym fighter will likely fight again while champion Chris Weidman and challenger Vitor Belfort settle things atop the division.

The featherweight top 10 also has a new entrant in newly crowned Bellator champion Patricio Freire, whose powerful, accurate striking carried him to a five-round unanimous decision against Pat Curran at Bellator 123. With the loss, Curran falls to ranks of the 145-pound contenders.

In other action, No. 9 flyweight John Moraga held his spot with a second-round submission of prospect Justin Scoggins, while Tonya Evinger maintained her place on the list of women’s bantamweight contenders by tapping Ediane Gomes with a first-round armbar at Invicta Fighting Championships 8.