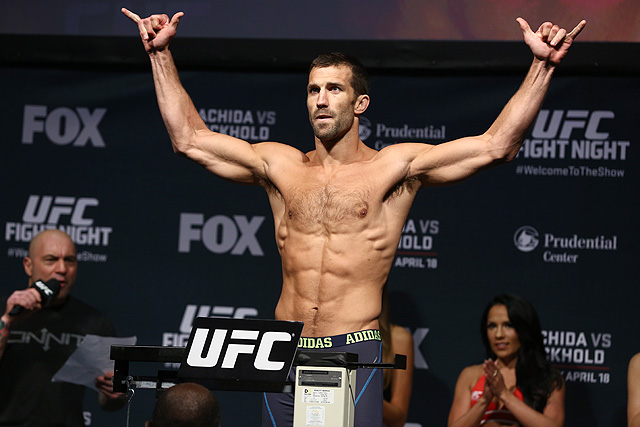 UFC on Fox 15 was brimming with fights which featured contenders and rising stars, but the card undoubtedly held the most significance for the middleweight division.

With the long-delayed Ultimate Fighting Championship title fight between Chris Weidman and Vitor Belfort one month away, Luke Rockhold, Lyoto Machida and Ronaldo Souza went in search of impressive wins on April 18, hoping of becoming the next challenger at 185 pounds. While the contendership picture remained unclear after the event, Rockhold made the strongest case in the headliner, putting on a breakout performance by roughing up and then submitting former light heavyweight champion Machida.

Souza was also dominant, albeit against lesser opposition, as the withdrawal of Yoel Romero just one week prior to the show left “Jacare” slotted in a rematch with late replacement Chris Camozzi. The Brazilian jiu-jitsu whiz made short work of Camozzi on the canvas, as Souza earned a first-round submission 64 seconds quicker than when the pair met in May 2013.

Rockhold moves ahead of Souza and claims the No. 4 spot in this edition of the middleweight top 10, while Machida remains behind both at No. 6.

Hawaiian prospect Max Holloway continued his assault on the featherweight division by outworking Cub Swanson en route to a third-round submission via guillotine choke. With his sixth straight win, the 23-year-old Holloway jumps four places to the No. 6 spot, while Swanson -- who has now lost consecutive fights for the first time in his career -- drops two to No. 7.

Unbeaten Aljamain Sterling earned his first showing in the bantamweight rankings by styling on perennial 135-pound ranker Takeya Mizugaki. Sterling enters in the No. 6 spot, which previously belonged to Mizugaki, who drops to No. 7. The entrance of Sterling bumps Bellator MMA champ Marcos Galvao from the top 10.

Ovince St. Preux followed his November bashing of Mauricio Rua with another impressive knockout, this time neutralizing the wrestling of Patrick Cummins before knocking him unconscious with six seconds left in the opening round. “OSP” moves up one place in the light heavyweight top 10, jumping over Glover Teixeira at No. 7.