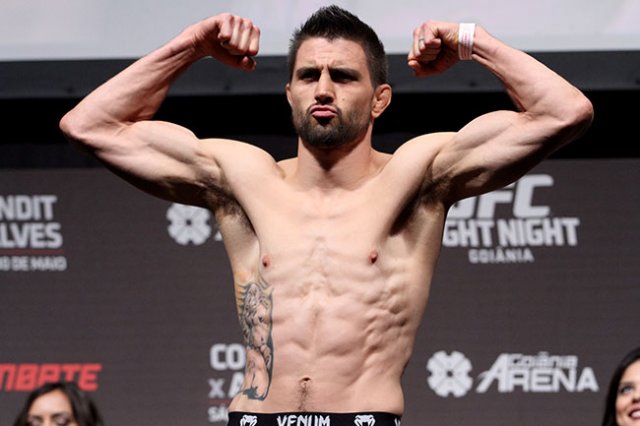 Carlos Condit knows how to make a comeback.

Fighting for the first time in 14 months after surgery to repair a torn ACL, the 31-year-old New Mexico native looked like he never missed a step, as he tore through Thiago Alves in the main event of May 30’s UFC Fight Night in Goiania, Brazil. Condit’s always-vicious striking was on-point, as he used elbows and punches to bust up Alves’ nose and force a doctor stoppage after two of the scheduled five rounds. The win sees Condit maintain his spot at No. 5 in the welterweight top 10, just behind the man who kicked out his leg, Tyron Woodley.

The card’s co-main event featured a featherweight duel between Charles Oliveira and Nik Lentz -- a rematch of a 2011 bout which was overturned due to Oliveira landing an illegal knee. This time, there was no controversy: “Charles do Bronx” roughed up a tired Lentz with clinch knees in the third round, then jumped guard with a tight guillotine and forced the American to tap out. Oliveira, who has submitted three of his last four opponents, joins the 145-pound rankings at No. 8, while previously 10th-ranked Lentz drops to the list of contenders.

Finally, flyweight ground specialist Jussier da Silva used a diverse game plan to outwork fellow Brazilian Wilson Reis in a three-round decision. “Formiga” rises one spot to No. 4 in the 125-pound rankings, surpassing the man who defeated him in 2011, Ian McCall.