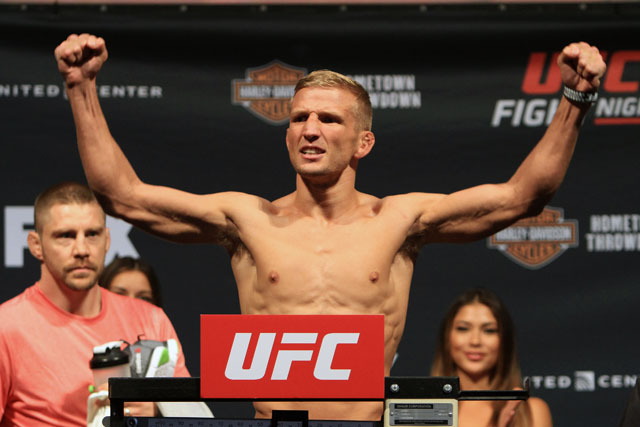 It looks like the bantamweight division will have to get used to T.J. Dillashaw.

The Team Alpha Male fighter was sensational in his July 25 rematch with Renan Barao at UFC on Fox 16, proving that his upset victory over the Brazilian in 2014 was no fluke. Dillashaw defended his Ultimate Fighting Championship title in style, consistently beating his challenger to the punch and working circles around Barao on the feet en route to a vicious fourth-round knockout.

With the result, “Thrillashaw” stays atop the 135-pound rankings, while Barao hangs on to the No. 2 spot. After the fight, Dillashaw mentioned the names of a pair of likely future opponents: former champion Dominick Cruz, who never lost his belt in the cage, and Raphael Assuncao, a man to whom Dillashaw dropped a narrow split decision in 2013.

The card’s co-main event saw women’s bantamweight contender Miesha Tate secure a future title shot by outworking Jessica Eye across three rounds. Tate remains stuck in the No. 3 spot due to head-to-head losses against Ronda Rousey and Cat Zingano, while Eye falls one place to No. 8 following losses in two of her last three outings.

Edson Barboza kept his spot on the list of lightweight contenders by claiming a unanimous decision over previously unbeaten Paul Felder in the card’s “Fight of the Night.”