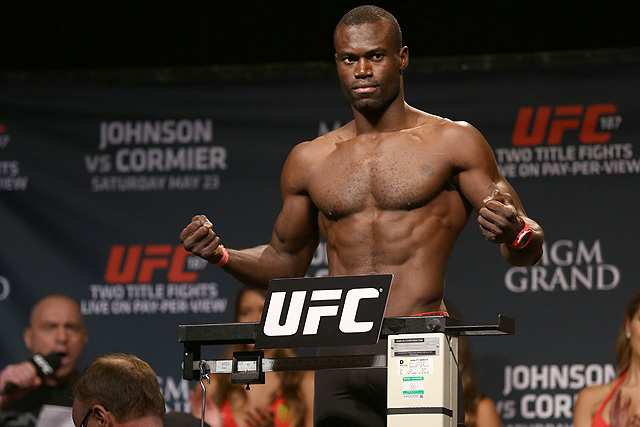 Uriah Hall’s stunning victory at UFC Fight Night in Japan has caused some movement in the 185-pound ranks.

A sizable underdog heading into his Sept. 27 meeting with former Strikeforce champ Gegard Mousasi, Hall appeared to be well on his way to a loss after being ground out completely in the opening round. Moments into round two, however, the Jamaica-born striker lit up Mousasi with a spinning kick to the face, followed by a flying knee and a barrage of ground-and-pound which ultimately ended the fight. The emphatic stoppage victory lands Hall on Sherdog.com’s list of middleweight contenders, while former No. 7 Mousasi also tumbles outside the top 10.

Previously eighth-ranked middleweight Tim Kennedy has been removed from the rankings after one year of inactivity with no upcoming fight scheduled. The exits of Kennedy and Mousasi from the rankings leave room for new blood in the form of Thales Leites and Derek Brunson, who check in at No. 9 and 10, respectively.

The main event of UFC Fight Night “Barnett vs. Nelson” saw former heavyweight rankers Josh Barnett and Roy Nelson trade blows and takedowns for 25 minutes. The clinch-filled struggle was controlled in large part by Barnett, who tagged Nelson with a UFC heavyweight record 146 significant strikes. Barnett reenters the fray on the list of 265-pound contenders, taking the place of Stephan Puetz.

Another top-tier big man, Bellator heavyweight champ Vitaly Minakov, returned to the ring in his native Russia on Sept. 25. The sambo stylist made short work of former UFC signee Geronimo dos Santos with a first-round armbar, reclaiming the No. 10 spot in the heavyweight rankings in the process. Minakov’s return bumps former No. 10 Frank Mir to the contender list, leaving Antonio Silva on the outside looking in.

In other action, Takeya Mizugaki picked up a hard-earned decision win against George Roop to move up one place to No. 7 in the bantamweight top 10, while former Bellator champ Joe Warren earned another crack at the belt -- and maintained his place on the contenders list -- by grinding out L.C. Davis at Bellator 143.