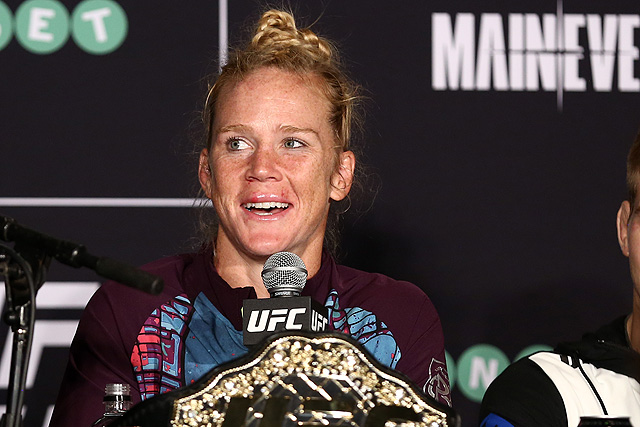 Holm, who was slotted at No. 9 in the Sherdog.com divisional rankings ahead of UFC 193, vaults to the top of the list after utterly dismantling and snatching the women’s bantamweight crown from Ronda Rousey in Melbourne. Rousey, who held the No. 1 spot since women’s rankings were established, falls to No. 2, just above several of her previously vanquished foes.

Meanwhile, women’s strawweight champion Joanna Jedrzejczyk went five rounds for the first time in her MMA career, as the Polish muay Thai specialist outpointed challenger Valerie Letourneau across 25 minutes. The win did not come without a price: On her way to setting a new record for significant strikes in a title bout (220), Jedrzejczyk suffered a broken right hand which will require surgery. Nevertheless, Jedrzejczyk stays on top of the 115-pound heap, while Letourneau holds at No. 6 after her first loss in four Octagon outings.

Elsewhere, Robert Whittaker’s impressive decision victory over Uriah Hall lands the Australian on the list of middleweight contenders, and once-beaten Russian Ruslan Magomedov takes the place of Mirko Filipovic on the heavyweight contender list after “Cro Cop” announced his retirement and was provisionally suspended for doping by the United States Anti-Doping Agency.