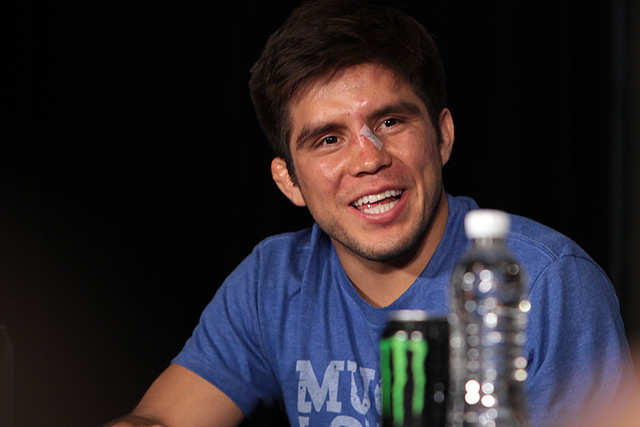 Henry Cejudo went to Monterrey, Mexico, for the biggest fight of his young MMA career and left as the UFC flyweight division’s likely No. 1 contender.

The 2008 Olympic wrestling gold medalist opted to showcase his developing striking game in his Nov. 21 UFC Fight Night tussle with Brazilian jiu-jitsu black belt Jussier da Silva. Cejudo’s game plan stymied “Formiga” and led the American to a decision victory after three rounds, leaving Cejudo as the next logical challenger to 125-pound kingpin Demetrious Johnson’s throne. For now, Cejudo vaults from No. 9 to No. 4 in the Sherdog.com flyweight top 10, while da Silva drops one spot to No. 5.

The Monterrey card’s main event saw short-notice opponent extraordinaire Neil Magny capitalize on yet another late opportunity. Magny got off to a hot start against Kelvin Gastelum, winning the first three rounds of their 25-minute affair. Gastelum would storm back for a dominant fourth round and a strong fifth, but Magny held on to claim a split decision in a controversial call from the judges. Magny enters the welterweight rankings at No. 10 in this update.

In other action: Ricardo Lamas’ unanimous decision win over Diego Sanchez keeps “The Bully” in place as the No. 5 featherweight; Rousimar Palhares’ two-year suspension from the Nevada Athletic Commission renders him ineligible for ranking, moving Jake Shields up to No. 9; and unbeaten Kazakhstani standout Kairat Akhmetov joins the list of flyweight contenders after taking the One Championship belt from Adriano Moraes in a narrow, five-round split decision.