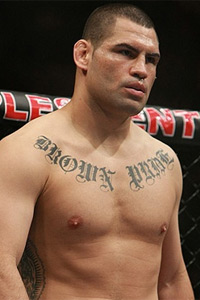 1. Cain Velasquez (9-0)
During his first week at the American Kickboxing Academy, trainers thought Velasquez was a future UFC heavyweight champion. On Oct. 21 in Anaheim, Calif., he made that a reality, blowing away Brock Lesnar in the first round to claim the UFC heavyweight crown. While he can celebrate for now, Velasquez will have to return early next year to defend his throne against fellow young heavyweight Junior dos Santos.

2. Brock Lesnar (5-2)
Debates over wrestling laurels, physical size and the like all went out the window at UFC 121, as Lesnar just could not compete with Cain Velasquez. Lesnar was battered from pillar-to-post for over four minutes, en route to losing his title to Velasquez in a one-sided thumping.

3. Fabricio Werdum (14-4-1)
On Aug. 18, Werdum underwent surgery and had 27 loose bone fragments removed from his left elbow. Already in physiotherapy to rehab, the author of 2010’s most significant upset now targets a return to action in the first quarter of 2011.

4. Fedor Emelianenko (31-2, 1 NC)
The chicanery of another Emelianenko pre-fight has begun. Emelianenko’s promoters at M-1 have openly announced their interest in fighting Strikeforce heavyweight champion Alistair Overeem, on the condition that the Dutchman submits to Olympic-style drug testing. Naturally, little headway has been made surrounding Emelianenko’s next bout.

5. Junior dos Santos (12-1)
Dos Santos’ next step is now clear. Courtesy of Cain Velasquez’s thrashing of Brock Lesnar at UFC 121 on Oct. 23, “Cigano” will challenge Velasquez for the UFC heavyweight crown in early 2011 in a great pairing of thrilling young heavyweights.

6. Shane Carwin (12-1)
The second half of 2010 has been rough for Carwin. After falling to Brock Lesnar in dramatic fashion in their July UFC title bout, his name was connected to a federal steroids investigation. The mammoth Coloradan will get the chance to start 2011 on a higher note, as he meets “The Ultimate Fighter” Season 10 winner Roy Nelson at UFC 125 on Jan. 1.

7. Frank Mir (14-5)
At UFC 119, Mir and Mirko "Cro Cop" Filipovic underwhelmed the Indianapolis crowd for 14 minutes with a dreadful exhibition of aimless clinching. Finally, with just 58 ticks left in the fight, Mir landed a colossal knee that crushed the Croat, notching one of the least impressive highlight-reel KOs in recent memory.

8. Alistair Overeem (33-11, 1 NC)
The Strikeforce heavyweight champion’s efforts continue to come in kickboxing rather than MMA. “The Demolition Man” earned an easy first-round KO over Aussie Ben Edwards on Oct. 2 in Seoul, South Korea, to advance to December’s K-1 World Grand Prix finale in Yokohama, Japan. As for an MMA return, it remains anyone’s guess for now.

9. Antonio Rodrigo Nogueira (32-6-1, 1 NC)
Back in December 2008, Nogueira was taken out by Frank Mir in lopsided fashion. He was scheduled for a chance at redemption against Mir at UFC 119 on Sept. 25, until a hip injury struck, forcing “Minotauro” from the fight and onto the surgeon’s table.

10. Antonio Silva (14-2)
Silva’s hope was that he would get to face Strikeforce heavyweight champion Alistair Overeem. With “The Demolition Man” dealing with his K-1 duties in December, “Pezao” will instead meet the Dutchman’s older brother, Valentijn Overeem, on Dec. 4 in St. Louis.