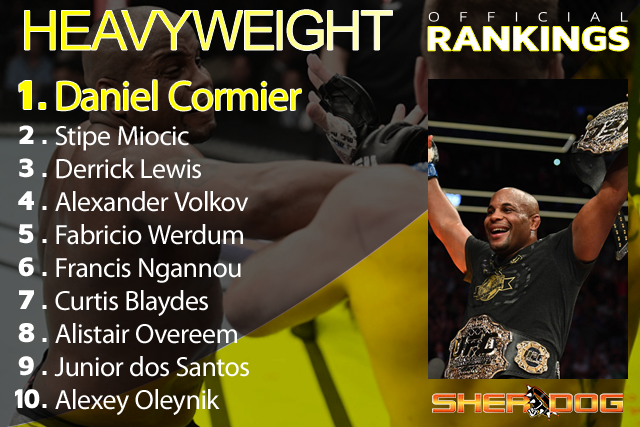 Cormier added to his legacy at UFC 226, where he became only the second simultaneous two-division titleholder in the promotion’s history with a first-round knockout of heavyweight champ Stipe Miocic in the main event. After being stripped of his light heavyweight crown, Cormier will defend his heavyweight crown against Derrick Lewis at UFC 230. Depending on how he fares against “The Black Beast” at Madison Square Garden, a lucrative showdown against Brock Lesnar awaits in early 2019.

Lewis possesses fight-altering power, and he showed it at UFC 229. After being outgunned by Alexander Volkov for the better part of three rounds, “The Black Beast” found a home for his right hand to set up an improbable victory with just 11 seconds remaining in their fight. It may not always look pretty, but Lewis has been victorious in nine of his last 10 Octagon appearances. That run set him up for an improbable title shot against Daniel Cormier in the UFC 230 headliner at Madison Square Garden in New York.

Perhaps no fighter’s stock has fallen faster than that of Ngannou, who, after being dominated for five rounds by Stipe Moicic in a January title bout, looked completely gunshy against Derrick Lewis at UFC 226. After beginning his promotional tenure with six consecutive finishes, “The Predator” will have to recapture the killer instinct he showed during that run if he is to return to contention in the heavyweight division. The process begins in a UFC Fight Night 141 rematch with Curtis Blaydes, whom Ngannou defeated via doctor stoppage in April 2016.

If there was any doubt before, there is none now: Blaydes is a serious threat to the heavyweight division. “Razor” Blaydes followed up a dominant decision win over Mark Hunt at UFC 221 with a bloody and brutal elbow-induced third-round finish of Alistair Overeem at UFC 225. Blaydes has won four fights in a row and will get a chance to avenge his only career defeat when he faces Francis Ngannou at UFC Fight Night 141 on Nov. 24 in Beijing.

Overeem never looked comfortable against Curtis Blaydes, as “The Reem” struggled to defend his adversary’s takedowns before suffering a violent defeat via elbows in their UFC 225 encounter. While Overeem remains one of the division’s most skilled strikers, back-to-back brutal knockout defeats at the hands of Blaydes and Francis Ngannou could signal the end of the Dutchman’s time as a top contender. Overeem will return to action against Sergey Pavlovich at UFC Fight Night 141 in Beijing on Nov. 24.

Forced into a longer-than-desired absence due to a tainted supplement given to him by a Brazilian compounding pharmacy, dos Santos made a somewhat triumphant return at UFC Fight Night 133, where he earned a five-round decision over former Word Series of Fighting titlist Blagoy Ivanov. Still, the victory was not especially entertaining, as “Cigano” looked far removed from his heavyweight championship heyday. Dos Santos will look to improve upon that showing when he faces prospect Tai Tuivasa at UFC Fight Night 142 on Dec. 1.