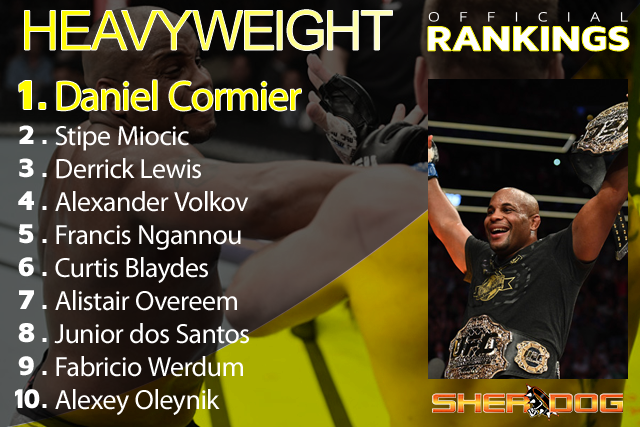 The best thing you can say about Cormier’s effort at UFC 230 was that it was predictable. “DC” landed multiple takedowns on underdog Derrick Lewis before securing a tapout with a rear-naked choke at the 2:14 mark of the second stanza. Cormier became the first fighter to defend titles from two divisions in UFC history. He also set the stage for his anticipated showdown with Brock Lesnar early next year, targeting UFC 235 on March 2 for his farewell bout.

It’s been a memorable run for Lewis, who notched wins over Alexander Volkov, Francis Ngannou and Marcin Tybura in 2018 to become a social media sensation and an unlikely No. 1 contender. “The Black Beast” looked predictably overmatched in losing to Daniel Cormier at UFC 230, but it doesn’t change the fact that the Houston native has bucked the odds to win nine of his last 11 promotional appearances. Lewis plans on taking a break and said after UFC 230 that the promotion can call him “before next summer.”.

Ngannou recaptured the form that made him one of the sport’s fastest rising stars at UFC Fight Night Beijing, where he need just 45 seconds to stop Curtis Blaydes in the evening’s headliner at Cadillac Arena. Not only did Ngannou earn a second triumph over Blaydes, but he erased some of the sting of back-to-back lackluster performances against Stipe Moicic and Derrick Lewis in his previous two Octagon appearances.

Blaydes carried a six-fight unbeaten streak into his rematch against Francis Ngannou at UFC Fight Night 141, but it appears “The Predator” has his number. Ngannou earned his second victory over Blaydes in Beijing, stopping the American wrestler just 45 seconds into their headlining bout in Beijing. For Blaydes, the disappointing setback put a halt to any talks of title contention. Nonetheless, the 27-year-old has vowed to bounce back from the loss.

A move to Elevation Fight Team provided Overeem with a fresh outlook following consecutive brutal knockout losses, and “The Reem” responded with a first-round stoppage of Sergey Pavlovich in the UFC Fight Night 141 co-main event. The 38-year-old Dutchman showcased formidable ground-and-pound in handing the Pavlovich, a UFC newcomer, his first career defeat. Overeem is now 9-6 during his tenure with the Las Vegas-based promotion.

Up-and-coming heavyweights cannot take dos Santos lightly. “Cigano” proved how dangerous he can be in the UFC Night 142 headliner, as he capitalized on Tai Tuivasa’s aggression to earn a second-round TKO in Adelaide, Australia. The Brazilian has won three of his last four Octagon appearances and targeted a rematch with Alistair Overeem in his post-fight Octagon interview.