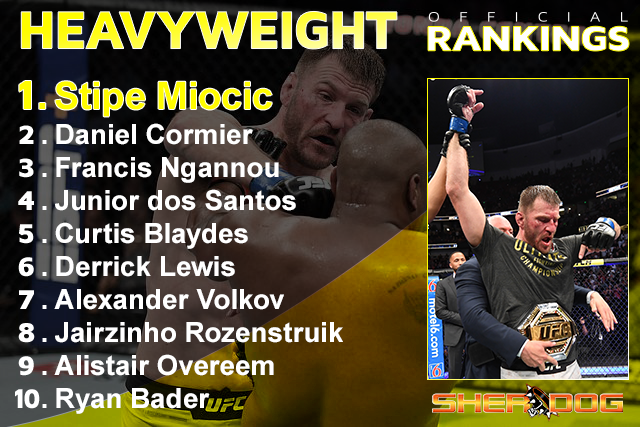 Ngannou has the type of tantalizing power that can put anyone to sleep in a matter of seconds, and he showcased it once again at UFC on ESPN 3, where he dispatched Junior dos Santos in a little more than one minute in the evening’s headliner in Minneapolis. “The Predator” has now authored three consecutive first-round finishes, putting a disappointing two-fight skid in the first half of 2018 squarely in his rearview mirror. Rather than wait on Daniel Cormier and Stipe Miocic to conclude their championship trilogy, Ngannou will stay active and face Jairzinho Rozenstruik in the UFC Columbus main event on March 28.

Dos Santos’ mini-resurgence came to a screeching halt in the UFC on ESPN 3 headliner, where he was soundly defeated by Francis Ngannou via first-round technical knockout in Minneapolis. Prior to that, “Cigano” had climbed back into contention with successive triumphs over Blagoy Ivanov, Tai Tuivasa and Derrick Lewis. Now 35 years old, it remains a question if wear and tear will eventually begin to catch up with the Brazilian veteran, but for now he’s still a Top 5 heavyweight talent. He was supposed to return to the Octagon against Alexander Volkov in Moscow on Nov. 9, but a bacterial infection forced him to withdraw from that contest. Dos Santos will look to make a quick recovery when he meets Curtis Blaydes when the promotion heads to Raleigh, N.C. on Jan. 25.

Blaydes absolutely overwhelmed Shamil Abdurakhimov at UFC 242, relying on takedowns and powerful ground-and-pound to to earn a technical knockout stoppage at the 2:22 mark of Round 2 in Abu Dhabi. Few in the division possess the frightening top position power of Blaydes, who punctuated his latest triumph with a brutal elbow that cut his foe open. “Razor” is now 7-2 with one no contest in UFC competition, and his only two setbacks have come at the hands of top contender Francis Ngannou. Next up, Blaydes will square off against Junior dos Santos in the UFC Raleigh headliner on Jan. 25.

Sporting an improved physique, Lewis battled through three tough rounds to take a unanimous verdict against the durable Blagoy Ivanov at UFC 244. “The Black Beast” landed his share of heavy shots and was able to escape a few precarious positions on the ground to earn his 13th Octagon triumph at heavyweight. It was a welcome return to the win column for the Houston native, who had been finished in back-to-back outings by Junior dos Santos and Daniel Cormier. Next, Lewis will welcome Ilir Latifi to the heavyweight division at UFC 247.

Rozenstruik didn’t look quite ready for prime time during the early rounds of his headlining clash with Alistair Overeem at UFC on ESPN 7, but “Bigi Boy” landed a massive right hand to put his opponent away with just four seconds remaining in the fight. The result is a testament to the fight-ending power of Rozenstruik, whose four-fight KO/TKO streak is currently the longest in the Las Vegas-based promotion. Rozenstruik is nothing if not bold, as he called out fellow knockout artist Francis Ngannou following his victory. Rozenstruik will get his wish when he faces Ngannou at UFC Columbus on March 28.

As he has aged, Overeem has adopted a conservative and efficient approach in the Octagon that has largely been successful. Unfortunately, “The Reem” was unable to make that style work for a full 25 minutes against Jairzinho Rozenstruik in the UFC on ESPN 7 headliner, as he was knocked out by a massive right hand at the 4:56 mark of Round 5. The loss has to be especially painful considering the 39-year-old Dutchman was well on his way to a decision victory prior to the decisive blow. In defeat, Overeem had a modest two-fight winning streak snapped along with his hopes of putting together another run at the UFC heavyweight belt.

Bader was never in danger against Cheick Kongo in the Bellator 226 headliner, as he rattled the Frenchman on the feet before taking his opponent down and imposing his will on the mat. However, the bout ended prematurely due to an inadvertent eye poke from the Power MMA Team representative. As a result, Bader has a no contest on his record but is unbeaten in his last eight bouts dating back to September 2016. Bader was hoping to challenge for the Rizin light heavyweight crown at the end of the year, but when negotiations fell apart, he shifted his focus to defending his Bellator 205-pound belt next.