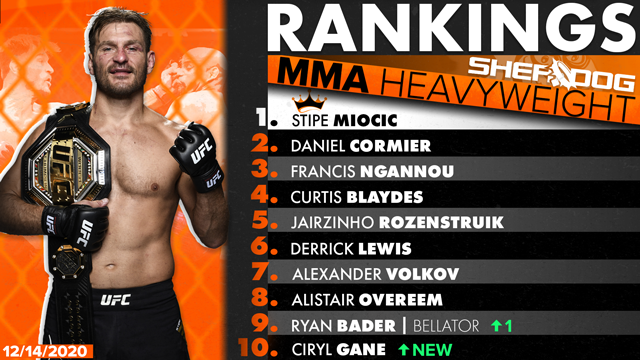 Ngannou bolstered an already-fearsome reputation at UFC 249, when he demolished the previously unbeaten Jairzinho Rozenstruik in just 20 seconds. It was the fourth straight first-round finish and eighth inside of a round overall in UFC competition for “The Predator,” who would appear to be the logical next title challenger now that Miocic and Cormier have settled their trilogy. The UFC is reportedly targeting March for the Ngannou vs. Miocic rematch.

Blaydes set a heavyweight record with 14 takedowns in a unanimous decision win over Alexander Volkov in the UFC on ESPN 11 main event on June 20. While the Elevation Fight Team product fatigued in the championship rounds, he still had enough left in the tank to earn his fourth consecutive UFC triumph. Blaydes was supposed return to action against Derrick Lewis in the UFC on ESPN 18 headliner before a positive COVID-19 test for Blaydes scrapped the bout one day prior to the event.

Lewis took a risky approach against Alexey Oleynik in the UFC Fight Night 174 main event, as he elected to grapple with his veteran opponent for a round at the UFC Apex in Las Vegas. After nearly being submitted, Lewis quit messing around and stopped the Russian with punches 21 seconds into the second frame. Lewis, who said he wants to slim down by 15 to 20 pounds before his next fight, has won three straight and is the UFC’s all-time heavyweight knockout leader. “The Black Beast” had a date with takedown machine Curtis Blaydes at UFC on ESPN 18 before a positive COVID-19 test for Blaydes scrapped the proposed headliner.

After being grounded repeatedly in a loss to Curtis Blaydes at UFC on ESPN 11, Volkov got back on track at UFC 254, where he finished Walt Harris with a front kick to the body and follow-up right hands 1:15 into the second round of their heavyweight clash in Abu Dhabi on Oct. 24. The former Bellator and M-1 Global title holder will lock horns with Alistair Overeem in the main event of a UFC Fight Night card on Feb. 6.

Overeem played the long game against Augusto Sakai, rallying for a fifth-round technical knockout victory in the UFC Fight Night 176 headliner at the UFC Apex in Las Vegas on Sept. 5. The Dutchman’s ability to make strategic adjustments has allowed him to remain a heavyweight contender as he enters his 40s, and another victory could have him knocking on the door of his second title shot within the Las Vegas-based promotion. Overeem will next face Alexander Volkov in the main event of a UFC Fight Night card on Feb. 6.

Gane earned a signature triumph at UFC 256, when he defeated former heavyweight champ Junior dos Santos via technical knockout 2:34 into Round 2 of their featured encounter at the UFC Apex in Las Vegas on Dec. 12. That makes four UFC triumphs — and three finishes — for the 30-year-old Frenchman, who is rapidly trending upward in the promotion’s big-man division.