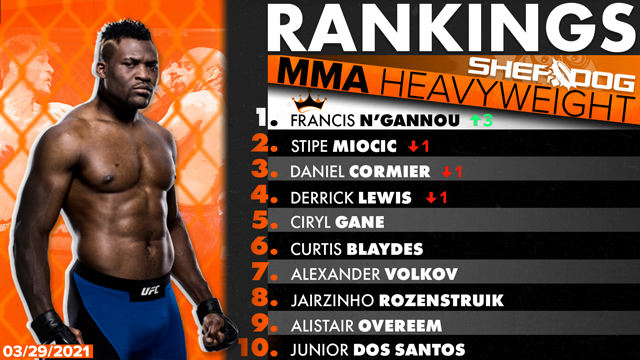 While Gane might not have gained many new fans with his performance at UFC Fight Night 186, he was in complete control throughout his five-round verdict over Jairzinho Rozenstruik at the UFC Apex in Las Vegas on Feb. 27. In going 25 minutes for the first time in his career, “Bon Gamin” blended rangy kickboxing and timely takedowns while avoiding the formidable power of his opponent. Less than three years into his professional MMA career, the Frenchman appears to be progressing quickly as he climbs the ranks of the heavyweight division. Next, Gane will lock horns with former Bellator champ Alexander Volkov on June 26.

Volkov was in complete control in the UFC Fight Night 184 headliner as he bloodied Alistair Overeem with accurate and powerful punches en route to a second-round technical knockout victory at the UFC Apex in Las Vegas. The former Bellator MMA and M-1 Global champion still has his weaknesses – witness the 14 takedowns surrendered in a decision loss to Curtis Blaydes last June – but with victories in nine of his last 11 outings, “Drago” has the look of a serious contender in the UFC’s heavyweight division. He’ll look to take another step toward contention when he faces Ciryl Gane in the main event of a UFC card on June 26.

Rozenstruik appeared tentative throughout the UFC Fight Night 186 main event, and the end result was a forgettable five-round decision loss to Ciryl Gane at the UFC Apex in Las Vegas on Feb. 27. After beginning his promotional tenure with four consecutive knockout victories, “Bigi Boi” has dropped two of his last three Octagon appearances in contrasting fashion – the gun-shy effort vs. Gane and a 20-second KO defeat to Francis Ngannou at UFC 249..

Overeem has managed to extend his career thanks to a more measured approach that usually protects his declining chin. However, his tactics simply didn’t work at UFC Fight Night 184, where he was bloodied and battered by Alexander Volkov in a second-round TKO defeat on Feb. 6. Coming in, the Dutchman had won four of his previous five Octagon appearances and still entertained hopes of another UFC title run. Now, those dreams appear to be extinguished for good — especially considering that Overeem was released from his UFC contract in March.