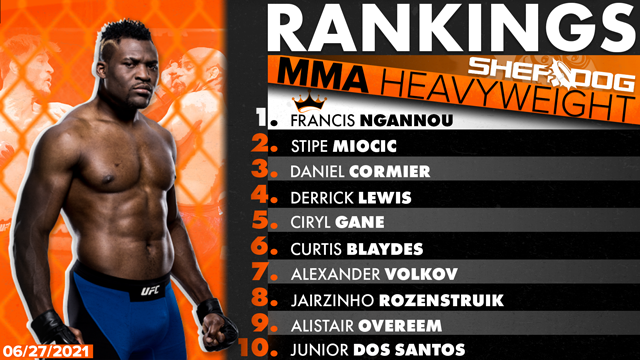 Ngannou brought the same ferocious knockout power into his rematch with Stipe Miocic at UFC 260, but improved takedown defense allowed him to use it much more effectively. The end result was a second-round knockout victory that made “The Predator” the 17th heavyweight champion in UFC history. The Cameroonian-born Frenchman has laid waste to some of the division’s best during his run to the top and if the promotion can make it happen, a victory over light heavyweight GOAT Jon Jones would only add to his overall legacy. For now, it appears a rematch with Derrick Lewis lies ahead.

A considerable underdog heading into the UFC Fight Night 185 main event, Lewis showcased his considerable power against Curtis Blaydes, dropping his foe with a perfectly-timed uppercut and adding two massive ground strikes for good measure. In derailing Blaydes’ title hopes, “The Black Beast” re-established himself as a heavyweight contender with his fourth consecutive win. And by tying Vitor Belfort for the most knockout wins in UFC history, Lewis reminded the world just how dangerous the proverbial “puncher’s chance” can be. Lewis will get a chance to capture championship gold when he meets Ciryl Gane for the interim belt at UFC 265.

Gane was fast and technical in the UFC Fight Night 190 headliner, as he earned a convincing unanimous decision over Alexander Volkov at the UFC Apex in Las Vegas on June 26. With back-to-back five-round verdicts under his belt – and six UFC triumphs overall – “Bon Gamin” has the look of a matchup nightmare. The Frenchman will get the chance to prove himself in an interim heavyweight title tilt against Derrick Lewis at UFC 265.

While it seemed likely that Blaydes would use his wrestling to overwhelm Derrick Lewis in the UFC Fight Night 185 headliner, it was a takedown attempt that ultimately led to his demise when Lewis dropped him with a powerful uppercut in the second round of their Feb. 20 bout in Las Vegas. Blaydes remains a difficult matchup for many in the division thanks to his wrestling acumen (he’s the all-time heavyweight leader in takedowns), but a trio of knockout losses in UFC competition indicates that his chin can fail him in critical moments. Blaydes will look to bounce back when he faces Jairzinho Rozenstruik at UFC 266.

After back-to-back technical knockout triumphs against Walt Harris and Alistair Overeem, Volkov had a chance to stake a serious claim to title contention against Ciryl Gane in the UFC Fight Night 190 main event. Alas, the former Bellator and M-1 Global champion had no answers for the technical striking of his opponent, as he lost a convincing five-round verdict at the UFC Apex in Las Vegas on June 26. “Drago” is 7-3 since joining the UFC in 2016, with his only losses coming to top contenders in Gane, Curtis Blaydes and Derrick Lewis..

Rozenstruik showed the difference between patient and tepid at UFC Fight Night 189, as he patiently waited for his opening before finishing Augusto Sakai at the 4:59 mark of Round 1 in the evening’s headliner at the UFC Apex in Las Vegas on June 5. It was a much-needed rebound effort following a lackluster five-round defeat to Ciryl Gane in February, and it gives “Bigi Boy” six wins in eight UFC appearances – all via knockout or technical knockout. The Surinamese fighter will return to action against Curtis Blaydes at UFC 266.

Overeem has managed to extend his career thanks to a more measured approach that usually protects his declining chin. However, his tactics simply didn’t work at UFC Fight Night 184, where he was bloodied and battered by Alexander Volkov in a second-round TKO defeat on Feb. 6. Coming in, the Dutchman had won four of his previous five Octagon appearances and still entertained hopes of another UFC title run. Now, those dreams appear to be extinguished for good — especially considering that Overeem was released from his UFC contract in March. Overeem will return to the kickboxing realm after signing with Glory Kickboxing.