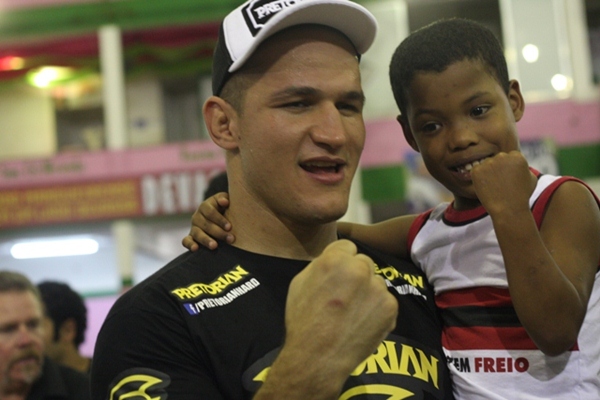 
Coming off of a UFC title win witnessed by tens of millions live in November, dos Santos is primed for the internationally high-profile fight of his career on May 26, as he will take on Alistair Overeem at UFC 146 in a bout that will uniquely tie up the heavyweight lineages of the UFC, Pride and Strikeforce. If you were feeling generous, you could even throw in the K-1 World Grand Prix.


Velasquez is back in the gym and training to bounce back from losing the UFC heavyweight strap to Junior dos Santos in November. Originally rumored to face Antonio Silva, the American Kickboxing Academy product is now expected to return to action against fellow ex-champ Frank Mir on an as-yet-unannounced date.


Overeem locked up a shot at the UFC heavyweight title by steamrolling former titleholder Brock Lesnar on Dec. 30 in Las Vegas. The former Strikeforce, Dream and K-1 World Grand Prix champion now has a chance to become the world’s top heavyweight, but he’ll first have to get through heavy handed Brazilian ace Junior dos Santos at UFC 146.


The man who submitted Fedor did much to restore the luster to his name on Feb. 4. In need of a solid win after a universally panned June performance against Alistair Overeem in Strikeforce, Werdum got just that in his Octagon return. The Brazilian earned a unanimous decision and “Fight of the Night” honors at UFC 143 by bashing the steel-chinned Roy Nelson with knees for the better part of 15 minutes.


Faced with the first two-fight skid of his career after suffering losses to Brock Lesnar and Junior dos Santos, Carwin was expected to compete at UFC 141 in December. However, the Grudge Training Center product was dealt yet another injury setback in October and will instead undergo back surgery with eyes on a mid-2012 return.


Mir can now lay claim as the first man to both knock out and submit Antonio Rodrigo Nogueira. The impressive and brutal submission came in their Dec. 10 rematch, when Mir snapped the Brazilian great’s right humerus with a vicious first-round kimura to settle their rivalry once and for all. While no date has been announced, Mir is expected to return against Cain Velasquez later this year.


Long regarded as one of MMA’s finest heavyweight grapplers, Nogueira suffered his first submission loss in more than 40 bouts on Dec. 10 when he had his right arm snapped by a Frank Mir kimura. The 35-year-old underwent surgery on the broken limb at the end of 2011 and is expected to resume training in mid-2012.


After being granted a conditional license by the California State Athletic Commission, the once-suspended Barnett is back on track to compete in the final of Strikeforce’s world heavyweight grand prix. The “Warmaster” is slated to face unbeaten AKA wrestler Daniel Cormier on May 19 in San Jose, Calif.


Cormier’s breakout win over Antonio Silva came at a cost, as his broken hand delayed his Strikeforce heavyweight grand prix final against Josh Barnett. Now, with the wrestler’s hand healed and his catch-wrestling opponent once again licensed to fight in California, the big men are set to collide on May 19 in San Jose.


Schaub seemed to be narrowing in on a title shot prior to his surprising upset loss at the hands of Antonio Rodrigo Nogueira in Rio de Janeiro this past August. “The Hybrid” will return to the cage April 21 at UFC 145 in Atlanta, where he will take on another heavyweight looking to recover lost hype in Ben Rothwell.